When asking, are restraining orders public record in NJ, many people may be surprised to learn about the New Jersey Protection Order Search.

Most states file the majority of restraining orders in family or civil courts, which prevents the order from appearing on the individual’s record, and New Jersey is no different in this regard.

However, the state of New Jersey also maintains a central registry of all individuals who have had domestic violence restraining orders, even if those individuals were never convicted in criminal court.

This database is not available to the public and is only used for law enforcement purposes, so the answer to the question, are restraining orders public in NJ is no…unless law enforcement officials or those in the Justice Department are looking.

In most states, including New Jersey, restraining orders are usually a civil issue and are filed in civil courts. This poses several issues when it comes to the records being publicly accessible.

Although the Freedom of Information Act requires that all court records be made publicly available, there are notable exceptions to this that affect how easy it is to obtain information about restraining orders.4 Since most restraining or protective orders are filed in civil court in New Jersey, then the majority of these records are sealed and are not public records.

However, there is an exception to this. In some cases, a domestic violence charge will be filed in a criminal court.5

Many individuals have likely heard about the NJ central registry for domestic violence.3

The grounds for restraining order NJ will vary on a case-by-case basis, however, the basic requirement is that there must be a legitimate threat to the safety and well-being of the individual who is filing for a restraining order, known as the petitioner.

Obviously, this definition is somewhat vague, which allows for a fairly broad interpretation. Individuals who are considering filing a restraining order should contact a lawyer to discuss options and if pursuing a protective order is the right move.

In general, a pattern and threats of domestic violence are some of the most common reasons that a judge will grant a protective order.6

How To Prove Harassment in NJ

Once again there is not really a direct answer.

Just like with all court and criminal proceedings, there is no surefire way to get the outcome you are hoping for.

Proving something like harassment in particular can be fairly difficult to prove as there may be a lack of hard evidence. This is one of the main reasons that individuals should contact a lawyer for help with this process.

A lawyer will be able to view the facts of the case and help decide on the best approach to convince a judge that the individual is being harassed and that a restraining order might be necessary.

How To Put a Restraining Order on Someone in NJ

The judge will then look at the facts of the case and decide if there is cause for a restraining order to be filed against the individual.

When it comes to how to put a restraining order on someone in NJ, the process is fairly simple and can be done without the help of an attorney. The first thing individuals will need to do is to locate and visit the nearest New Jersey family court.8

At the TRO hearing, the individual will be able to present their case to a judge who will then decide if there is grounds to grant a temporary restraining order. It is important to note that only the petitioner needs to be present at the TRO hearing, the defendant does not need to be present in order for the judge to grant a temporary restraining order.

When it comes to a restraining order NJ stalking is another common reason that a judge will grant a protective order. However, individuals should be aware of the exact parameters that must be met in order for a behavior to be considered stalking in New Jersey.1

Individuals should always contact a lawyer and discuss the matter if possible.

Getting a restraining order NJ emotional abuse is also possible, although a little bit more difficult.

One of the main reasons that emotional abuse can be difficult to prove is there is a lack of physical evidence in most cases. However, using text messages or email evidence is fairly common in these cases.

Types of Restraining Orders in NJ As mentioned, a temporary restraining order is used to protect an individual until the court date when testimony from both sides will be heard. This is similar to someone being arrested and put in jail despite not actually having been convicted yet.

A TRO will usually last about two weeks or at least until the court date.

Although domestic violence and restraining orders will factor heavily into child custody agreements, these issues will be settled separately in a family court.7

The consequences of a final restraining order in NJ are fairly severe in many cases. Generally, the individual will be fined a fee of $500 and will be added to the New Jersey domestic violence central registry.

Individuals who are on the central registry will also be unable to purchase a firearm for the rest of their lives. All of these consequences are in addition to the defendant not having a contact of any kind with the petitioner until the restraining order is lifted, should this ever occur.

One of the few requirements is that both individuals will need to be present at the hearing for the final restraining order.

Basically, the judge will decide on the conditions of the order upon hearing testimony from both parties. In many cases, the rules of the restraining order will involve no contact of any kind, no matter the circumstances. Restraining orders in New Jersey are issued through the courts, and domestic violence is defined on the state website.

However, in certain cases, the order might be less extreme, especially if there are children involved in the situation.

The temporary restraining order NJ court rules are fairly simple. Basically, a TRO will have the same rules as a FRO, usually that the individual the defendant can not contact the petitioner in any way, but instead of lasting forever these rules will only last until the hearing.

\If the FRO is granted then the rules will be reinstated, however, if the order is not granted then all of the active orders will be dismissed and the defendant will legally be allowed to contact the petitioner.

Regardless of the charge, the individual will be arrested.

How Long Do Restraining Orders Last in NJ?

Final restraining orders in New Jersey do not have time limits and can last forever. However, both individuals can petition to have the order lifted.

After hearing that pending charges may appear on a background check, many individuals will be wondering, if a restraining order is dismissed does it go on your record, however, this should not be the case.

As mentioned, Most restraining order cases in NJ are filed in civil court. Whether the order is dismissed or not makes no difference, civil cases are unlikely to appear on an individual’s record.

Related Reading: Do Pending Charges Show Up on a Background Check in 2022?

How To Dismiss a Restraining Order in NJ

Generally, if an order is filed in the first place it is because the petitioner feels that they are in danger. In order to obtain a dismissal, the individual will effectively need to prove that they are not dangerous and pose no legitimate threat to the petitioner.

This is a fairly complicated situation and it is highly recommended that individuals contact an attorney for legal counsel or representation if possible, as this will give them the best chances of having the order dismissed.

What To Say to Judge To Drop Restraining Order

When it comes to what to say to the judge to drop the restraining order, it will depend entirely on the circumstances of the case. The same as the petitioner will collect evidence to show the judge that they are in danger, the defendant will need to do the same to prove that they do not present a danger.

In many situations, this can be extremely difficult, especially if there has already been an established pattern of abuse.

Can I Drop a Temporary Restraining Order Before Court?

Individuals who have petitioned for a restraining order but have since changed their mind might be wondering if can I drop a temporary restraining order before the court, although possible it can be somewhat difficult, given the short amount of time that a TRO is active. Individuals will likely need legal help to get the process done on time, but the process essentially involves filing for the order to be dropped with the court that granted the TRO.

How To Get Charges Dropped Before Court Date

Some individuals who are facing criminal charges might have heard about getting charges dropped is one of the best outcomes for such a scenario and will be wondering how to get charges dropped before court date. Unfortunately, there is no reliable way to do so but there are some options worth exploring.

Most cases that are dropped before a court date are dropped due to new evidence coming to light that exonerates the individual of the crime they were accused of, or are dropped due to procedural issues with the arrest or investigation. Getting charges dropped is the best possible outcome and this is what lawyers will pursue if there is a legitimate opportunity.

Individuals will very likely need the help of a defense attorney to get charges dropped.

An individual can also perform and learn how to get a federal background check on yourself for the most thorough check possible.

Although there is a lot to consider outside of just the public record when it comes to, are restraining orders public record in NJ, the answer is generally no unless the order was filed in a criminal court. In some cases family court records will not be sealed, individuals can always check NJ court records for evidence of a protective order.2 Facing a restraining order can be a scary situation, especially when you don’t know the full effect it may have on your future.

Researching the protective order process is the first thing individuals should do so that they can have a better understanding of issues like, are restraining orders public record in NJ, and be prepared for the long-term effects it may have.

Does a Restraining Order Go on Your Record?

Can You Get a Restraining Order NJ Harassment?

Harassment is a legitimate reason to seek a restraining order in New Jersey.

What Is a Final Restraining Order Hearing NJ?

What Are the Reasons To Dismiss a Restraining Order?

A restraining order can be dismissed for several reasons, but anything that indicates the individual is not actually in danger can be grounds for dismissal.

What Are the Steps To Learn How To Fight a Restraining Order in NJ?

What Is a Certification To Dissolve a Restraining Order? 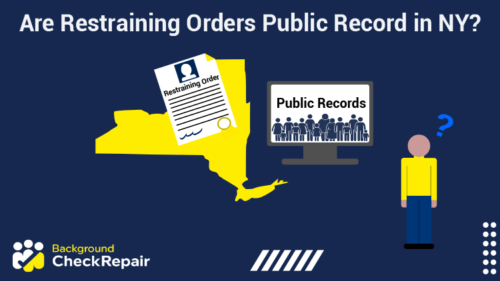 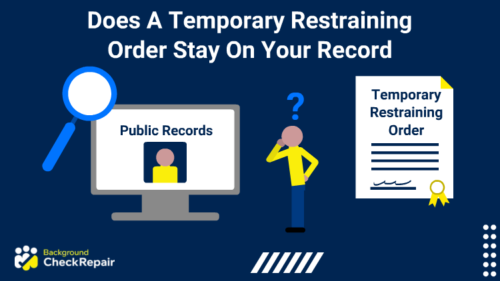 Does a Temporary Restraining Order Stay on Your Record? (TRO Rule) 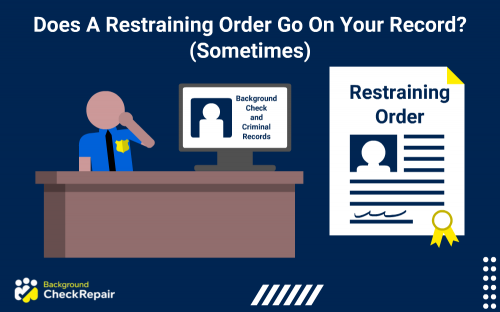 Does a Restraining Order Go on Your Record? (Sometimes)