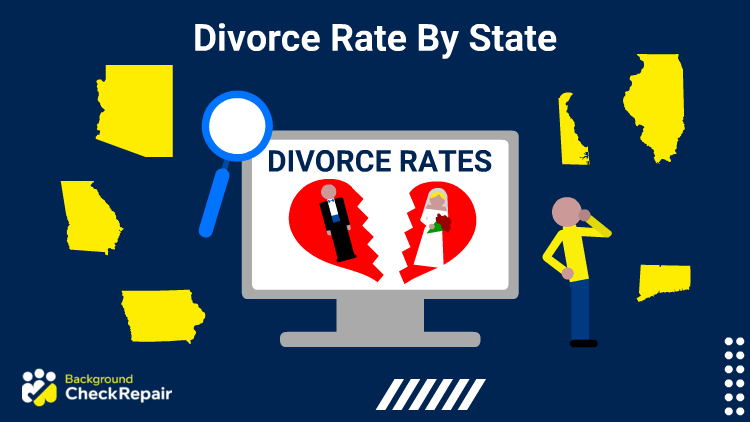 When comparing divorce rate by state, there are some interesting facts in the latest stats. Although many people think that the rate is 50 percent in the U.S., according to the Center for Disease Control data, that number is grossly exaggerated.

The divorce rate by state is actually much, much less.

Although divorce rates can be difficult to calculate, most studies indicate that the latest yearly statistics for the national divorce rate in the United States achieved peak percentage in the 1980’s.

By examining the highest to lowest rankings can shed some light on what factors commonly lead to divorce in the U.S.

What Are the Divorce Rates in America?

Although it has been said for years that the divorce rate among married couples is 50% this actually hasn’t been true for some time.3

The most recent statistics on the matter indicate that people are getting divorced less and less every year. The reason for the falling divorce rate is fairly complex and is likely due to dozens of competing factors. A good way to start to get a grasp on the socioeconomic reasons for divorce is to look at divorce statistics by state.1

When looking at the divorce rate by state, most people assume that California has the highest rate, however, Arkansas actually leads the way with California falling below the national average. For many years it was reported that many of the counties in Southern California had the highest divorce rate in the entire country. The list below outlines the current divorce rate in each state, based on the number of marriages in that state.

What Is the Average Length of Marriage Before Divorce in the U.S.?

Another useful statistic to examine is the demographics of divorced individuals. This should create an understanding of what factors are more likely to lead to divorce.2 One of the best things to look at to understand this phenomenon is to examine how long the average divorced couple was married before the divorce.

Just like looking at the divorce rate by state, this can help researchers examine the environmental factors that make divorce more likely.

What Is the Average Divorce Rate by Age?

The age at which the average couple gets divorced is also an important factor. Just as many people may have suspected, the older the couple, the less likely they are to get divorced. This also means that younger couples have a much higher chance of getting divorced. This also supports the idea that even for young couples that have been together for several years, the longer that the couple waits to get married, the lower the chance of divorce becomes.

Some point out that a premarital background check can do more harm than good, in contributing to the divorce rate.

What Is the U.S. Divorce Rate by Year?

As mentioned, the divorce rate in the United States has been dropping steadily since the 1960s. There are hundreds of possible reasons for this such as economic reasons, changes in educational standards, and religious reasons.

It’s well documented that the average age of married couples has been rising steadily for many years as well. While it was fairly common for teenagers to get married 50 years ago, these days the practice is relatively rare, despite it still being completely legal.

But, when considering this data, it becomes clear that the age of the married couple at the time of the marriage is one of the biggest factors when it comes to the odds of a divorce occurring.

What Are the Top Reasons for Divorce Statistics? (Divorce Rate by State)

Although looking at divorce rates amongst various demographics or looking at the divorce rate by state is useful in learning certain information, it still does not tell the reasons between the couple that led to a divorce. Numerous studies have been done on the subject with similar findings. Commonly among the top reasons is infidelity which is no surprise when considering that non-marriage relationships often end for the same reason.

More than half of the individuals involved in the study also mention age being a factor in the decision to divorce, further supporting the theory that age is one of the most important factors when it comes to a marriage ending in divorce.

Examining what industry divorced couples are in also gives insight into what makes divorce a relatively common occurrence in the United States. Unsurprisingly, financial stress is a major factor in divorce and couples that hold jobs that have below-average income are more likely to get divorced.

Divorce Rate in the World

Many of those curious about the divorce rate by state in the U.S. may be wondering where the U.S. ranks in the world when it comes to divorce rates. Although it may seem like the U.S has an extremely high divorce rate, when compared to the rest of the world the U.S is not quite the highest but is still near the top. Keep in mind that international divorce rates are difficult to calculate accurately due to every country reporting their divorce and marriage statistics differently.

With the available statistics for international divorces, Russia currently leads the way with 4.8 individuals per capita having been involved in a divorce at one point.

Divorce Rates by Age and Education

Besides age, another well-documented factor that leads to a higher divorce rate is education level. This also ties into income level as there is a clear correlation between education levels and income levels in the United States.

Statistics have shown that the less educated individuals have the more likely the marriage will end in a divorce. What many people may be surprised by is the difference between education levels being so massive. Individuals that did not complete high school tend to get divorced at nearly twice the national average and twice as often as those who have a bachelor’s degree or higher.

Divorce statistics can help individuals learn about the common causes of divorce and environmental factors that can put a strain on a marriage. Understanding the divorce rate by state can allow researchers to better understand why divorce rates that used to be much higher are falling all over the country.

What Are the Divorce Rate Statistics in the U.S.?

The current divorce rate in the U.S. is at an all-time low with an average of 14.1 people per capita.

Why Does the Divorce Rate by State Vary?

The divorce rate varies substantially from state to state. Currently, Arkansas has the highest divorce rate at 25.9% and North Dakota has the lowest with 8.7% of married couples, but there could be a number of reasons for it.

What State Has the Lowest Divorce Rate?

North Dakota has the current lowest divorce rate with a rate of 8.7% amongst married couples.

What Country Has the Highest Divorce Rate?

Russia likely has the highest divorce rate in the world amongst countries that gather this kind of data.

What Is the State With the Highest Divorce Rate?

Arkansas currently has the highest divorce rate with a rate of 25.9% of marriages ending in divorce.

What State Has the Highest Divorce Rate in the U.S.?

Arkansas currently has a divorce rate of 25.9%.

Is the California Divorce Rate 75 Percent?

No, the California divorce rate is currently around 13.8% which is below the national average.