Does a Background Check Include a Drug Test (Only These Jobs) When looking for a new job, one question that many people ask is “does a background check include a drug test?”

Interestingly, only certain jobs make a drug screening part of the requirements for hiring, however, that doesn’t mean that there aren’t exceptions. In fact, most laws and regulations regarding drug tests for employment are widely different between states. And ultimately, the choice to require a drug test as part of a background check is determined by the company or business offering the job.

But, there are certain jobs that will always require drug tests on a background screening, and some companies that make the process mandatory across the country. Knowing which companies and positions that say yes to the question, “does a background check include a drug test,” can make it easier to navigate the job market.

When an employer requests a background check, this doesn’t necessarily mean a mandatory drug screening will be done.

Many states offer suggestions about when a drug test should be mandatory for the safety of those working in the environment, but they don’t require it for all lines of work. For the most part, mandatory drug tests are issued during the pre-employment phase of the hiring process. Drug testing is part of the employment process for many companies, but there are many job that don’t drug test, and drug screening isn’t required for all background checks.

State and government jobs, as well as those in the healthcare industry, are among the most common professions that make drug testing mandatory during the background check. The Department of Transportation (DOT) has strict and detailed compliance rules that outline workplace drug and alcohol screenings, which are explained in 49 CFR, Part 40, and apply to all companies operating under the federally regulated transportation industry. 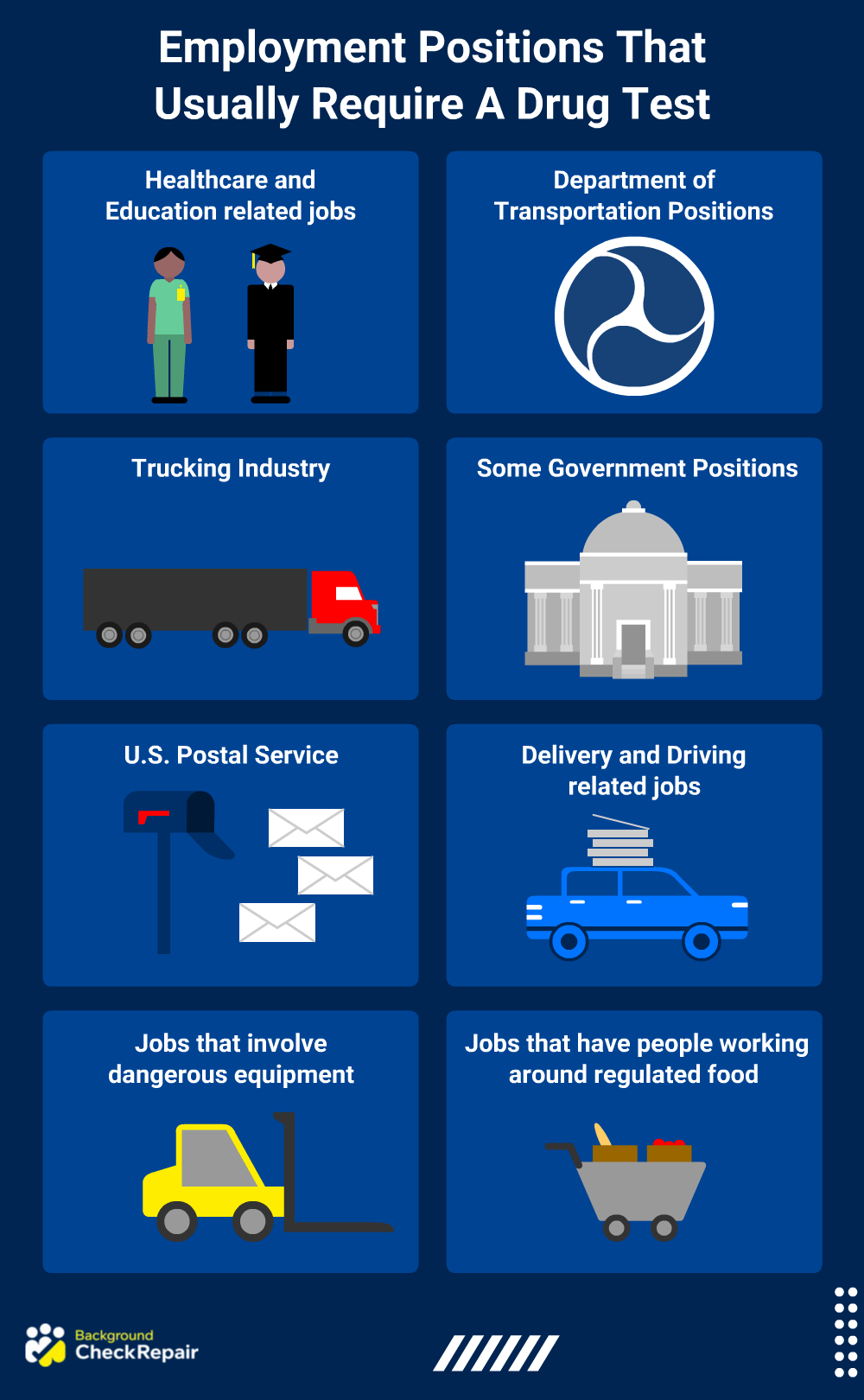 Required drug tests in the private employment sector are usually done when the job involves working around sensitive groups (such as children, the elderly or the disabled) or requires the operation of large, or dangerous machinery.

Employment positions that will usually require a drug test include:

The average number of positions within the United States that require a pre-employment drug test falls around 2%, most of which are positions in government or healthcare.9 Because of the sensitive nature of these positions, drug testing is a vital part of the screening.

In addition to the sort of jobs listed, all employers have the ability to mandate drug screenings for any position.

Can An Employee Deny (Refuse) a Drug Test?

Just as state and federal guidelines don’t mandate that all employers must run drug tests, they also don’t mandate employees (or potential employees) must take drug tests. A potential or current employee can refuse to have a drug test completed.

However, this doesn’t mean that they are exempt from the consequences. If an employer requires testing as a part of their on-boarding process, they have the right to withdraw an offer of employment to anyone who refuses a test.

Employers who choose to terminate or refuse employment based on refusal to take a drug test will need to make sure that they can prove drug testing directly relates to the person’s ability to do a job.1 An employee who is refused employment without proper documentation may have legal recourse if they feel their rights have been violated.

Are There Jobs That Don’t Drug Test?

There are many employers and some industries that don’t usually require pre-employment drug testing, including:6

While it is possible to find jobs within these industries that don’t require drug testing, keep in mind that any company can have a policy in place that makes the answer to “does a background check include a drug test,” yes.

Why Do Some Employers Choose Pre-Employment Drug Tests?

Despite the lack of set policies about drug testing in most states, many employers still choose to complete drug testing on potential employees, arguing significant benefits to drug screening, for both themselves and other employees. Some of the reasons include:2 Many people wonder if you fail a drug test does it go on your background check, and the answer is no. Unless the employer is regulated by the Department of Transportation, a background check will not include failed drug test results.

Some of the different types of criminal background checks employers use include:9

Individuals applying for government positions or jobs in the healthcare or education industry will be subjected to a stricter criminal check than those searching for a retail job. (It’s fairly simple to run a criminal background check on yourself to see what records will show up before an employer, or potential employer does.) Circumstances when a criminal background check would be completed without a drug test include:

In the process of answering “does a background check include a drug test”, it should be noted that there isn’t a single federal law that relates to drug testing for pre-employment purposes. However, there are some pieces of legislation that directly relate to how and when drug testing for employment can be used.

These federal acts are typically put in place to protect the employee and their rights, while giving them a safe environment to work.

The Drug-Free Workplace Act of 1988

This law requires employers to come up with a plan on how they will handle substance abuse in the workplace and provide a written statement to employees on their policies.3 Compliance is required for doing business with or for the federal government, and violations may be subject to fines.

The Civil Rights Act of 1964 prevents discrimination within the workplace against employees based on their race, sex, or gender. Under this law, employers can’t request drug testing based on any of those criteria.

The Fair Credit Reporting Act relates to the employee’s right to be informed about the drug screening as well as the results. Under this act, employees must be notified in writing and agree to testing before a check can be conducted.7 Background checks can’t be run without permission when being used in a professional capacity.

The information that the employer uses must also be relayed to the employee and any negative actions taken as a result of a background check report must be provided to them by the company. This allows the employee to correct any mistakes found on the report and appeal as necessary.

State Drug Testing Laws: Do You Have a Choice?

The drug testing requirements for each state are different. Some states such as Arkansas don’t offer a comprehensive law that details when and how drug testing can be utilized. However, states like Alabama and Oregon offer detailed laws that outline whether employees can choose to be subjected to drug testing.

There are also states, like Arkansas, that only provide details about the usage and testing of medical marijuana. Use the table below to access state specific information about testing laws in each state.

What About DOT Background Check Drug Tests Where Marijuana is Legal?

Background check drug tests can still test for marijuana, even in states where the it’s usage is legal. If a drug test comes back positive for marijuana usage, the employer will have discretion as far as how they handle the results, but it’s important to know that the Department of Transportation does not recognize ‘legal’ use as an exemption for failing a drug test.

However, if an employer runs a drug test in the state of Washington and finds marijuana usage, they will have the opportunity to reference their company drug policy to determine whether or not to refuse employment. If their drug policy states that the usage of any drug while on duty is a violation, they may have grounds to terminate or refuse employment.

Many people wonder whether medical marijuana use (with a doctor’s prescription) is exempt from background check drug tests. The answer depends on who is conducting the test, and why. Although some companies and positions will condone it, marijuana is still considered an illegal drug in the eyes of the federal government. This means that under federal law, marijuana use, even if prescribed by a doctor, is not exempt from the conditions dictated by law concerning federal government employment.4

The Department of Transportation states that medical marijuana is not considered a valid drug for any employee no matter where the test is being conducted.

Moreover, with the widespread and growing use of CBD oils, lotions, and other homeopathic cannabidiol supplements, many people also wonder if CBD use will cause them to fail a drug test. According to Harvard University, CBD (cannabinol) is technically not the same as THC (tetrahydrocannabinol), the compound in marijuana that generates the euphoric feeling. However, since the Food and Drug Administration (FDA) does not regulate CBD products, there’s no guarantee that the CBD product won’t contain THC, which can cause someone to fail a drug test.

In addition, the DOT has stated that the use of CBD is not a justifiable excuse for failing a drug test. All employers who request a drug test will have access to information about a failed screening. When a failed drug test is reported for employees during a DOT background check, it is also reported to the FMCSA Drug and Alcohol Clearinghouse. This clearinghouse is only used by the DOT and doesn’t contain information on tests from other industries or employers.5

Do Failed Drug Tests Show Up on Other Background Checks?

Failed drug tests that aren’t related to DOT jobs won’t show up on any other background checks obtained in the future. Information found on the test is only available to the requesting employer, and is never shared with any other member of the public or potential employers.

However, the DOT does maintain a history of failed drug tests within their system. An applicant with a previously failed test, who also re-applies to a DOT position, would have their previous failures reported. Does a criminal background check include a drug test? It depends on the company conducting the test, and whether it is regulated by the Department of Transportation.

How Long Do Failed Drug Tests Stay on a DOT Record?

When a drug test fails for the DOT, it stays on the record with the FMCSA Clearinghouse until the employee completes an assessment with a substance abuse professional. This process is a part of the return to duty process set out by the DOT, and ensures that all employees can get the assistance they need before being hired or returning to their job duties. In addition:

State and federal rules surrounding drug testing for pre-employment reasons are vague in most cases, which can leave a lot of the responsibility on the employer. Some industries require drug testing, while others choose to forego it.

Employers that choose to complete drug testing on employees usually do so in an effort to comply with insurance stipulations, provide a safe working environment, and to create a more productive workplace. Knowing the answer to the question of “does a background check include a drug test” can eliminate some of the guesswork during the hiring process.