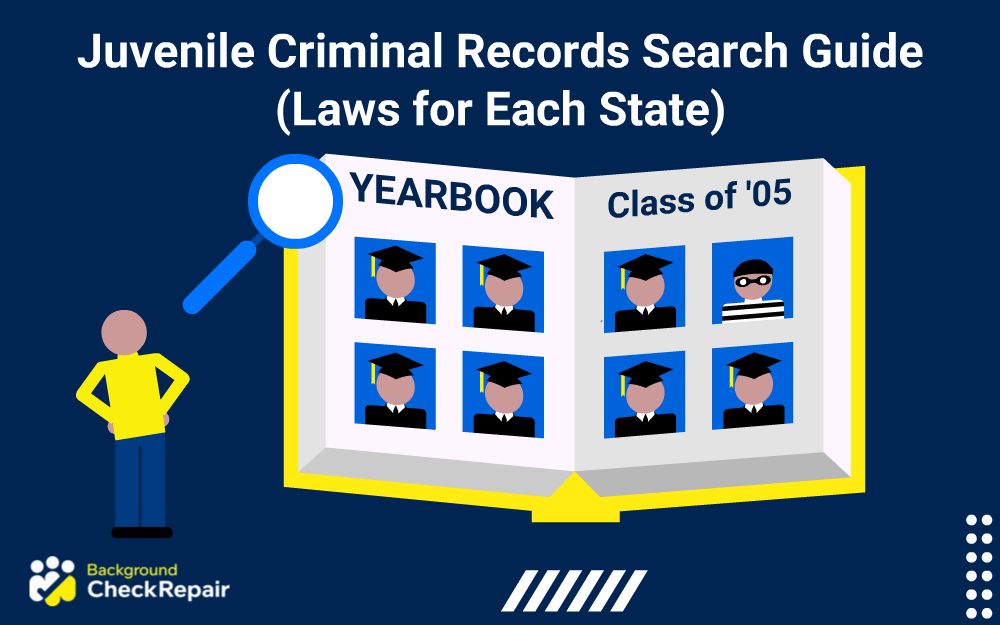 From personal curiosity or a concern for your own safety, there are many reasons why you would want to conduct a juvenile criminal records search. Whether you are looking for yourself or checking on another person, you may be interested in the different ways to get information in various states.

The ability to get those records will rely heavily on who you are. In most states, information about a crime committed by a youth can be hard to access unless the searcher has a direct relationship to the minor in question. However, there are exceptions, and some states offer more leniency in the type of information they consider public information, often this access is related to the severity or type of crime on a record.

Knowing the laws for each state can assist your juvenile criminal records search, eliminating some of the guesswork.

What Are Juvenile Conviction Records?

Juvenile records often consist of information about the crime that was committed, any punishment (like jail time or probation), and forms of rehabilitation that were assigned. Juvenile criminal records will still be present even if the child doesn’t get convicted of a crime.

In most cases, states will limit the information about juvenile records that can be found by the public. Despite popular belief, not all states consider crimes committed by a minor to be private information. There are some states that have passed laws that allow information to be shared and searched by the general public, especially if safety is a concern.

How to Search Juvenile Crime Records in Each State

The tools available for a juvenile criminal records search vary by state. Most states offer a free online search tool that will return public juvenile records, while others require a mailed document request. Most mailed requests have costs associated with receiving the legal details. Keep in mind this qualifies as a level 1 background check only. 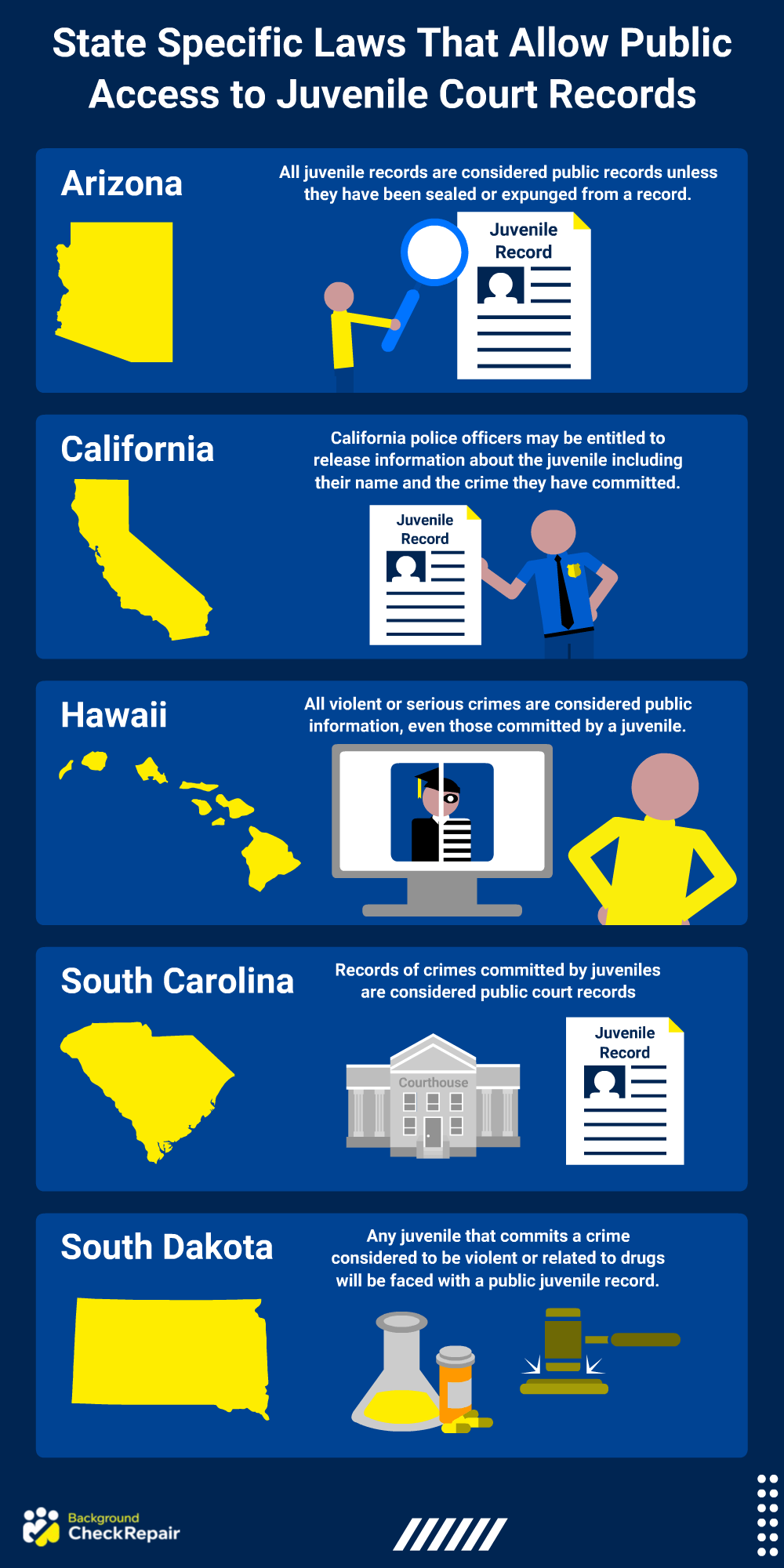 Both options will typically only return juvenile records that have been made a public record. It’s important to understand that a public records criminal search may not return any legal information. If this is the case, it doesn’t mean that there isn’t a criminal history. It simply means that the history isn’t public. Using the links listed below, it may be possible to locate juvenile justice records by searching in each of the 50 states.

Do Criminal Conviction Records for a Juvenile Show Up on a Background Check?

Because a juvenile criminal record is still considered a criminal record, it may show up on a background check that records juvenile court history. Juvenile criminal history comes back on certain types of background checks, including some pre-employment checks. Many states have a policy that expunges a minor’s criminal history once they turn 18. When a record is expunged, it is wiped off of the record completely. If this is the case, the record won’t show up on a background check. Not all states offer this option, so it is important to confirm the laws before assuming.

The severity of the crime will also play a part into whether or not it is displayed on an individual background check. A severe crime like sexual assault or murder will be less likely to be expunged or removed from a juvenile’s criminal conviction records, especially if multiple severe crimes were committed. Is a Juvenile Record Public Information? Who Has Access to Crimes on Juvenile Justice Records?

Most juvenile records found on a juvenile criminal records search are not considered public information. When a minor has a criminal record, it is usually sealed by the juvenile court. This means that it can’t be accessed by members of the public and, in some cases, isn’t available to law enforcement or government officials. There are some unique cases that make a juvenile conviction a piece of public information, including violent crimes and serious offenses (like a sex crime).1 The types of crimes that cause a juvenile record to become public vary based on specific states. Most states consider severe felonies like murder to be enough cause to make a juvenile record public.

In most states, there is a short list of people who have legal access to juvenile criminal records. The list typically includes the minor, the minor’s parents, and a hired attorney (if they have one). Depending on the state, juvenile records may also be available to child protective services, law enforcement (like juvenile probation officers), school officials, and federal or state attorneys.2 There are some states that require a court order before releasing any information on a juvenile criminal records search to individuals, even those featured on the list above.

Are There State Specific Laws That Allow Public Access to Juvenile Court Records and Crime Information?

Information found through a juvenile criminal records search is only available to the offender or someone with a direct responsibility for them. This can include a parent, guardian, or a hired attorney. Law enforcement officials also have access to court records juvenile. There are some states, however, that don’t hide all of a juvenile’s criminal history from the public, and will allow a juvenile case file to be available to the public if it is severe enough. Whether you are looking to access juvenile criminal history on yourself or someone else, it can be useful to know the laws and guidelines surrounding a search in each state. For specific details about states and the department that records criminal records and case information, you should always double check the state’s government website. Help can also be obtained through an attorney. You may want to consider learning what goes on a criminal record in your state.

Understanding the type of records that are available to the public will greatly help you in the process of completing your search. Some items will be more difficult to get than others, which will probably have an impact on whether or not you move forward with a search. If the information regarding a juvenile’s criminal history is important but hidden from the public, you may have the option of submitting a court order to gain access to it. This process typically involves legal proceedings and fees, which should be prepared for accordingly.

Armed with the techniques to complete a legal juvenile criminal records search, you should be able to access all information that is available to the public.