What Does a Divorce Decree Look Like? How Final Decree Works 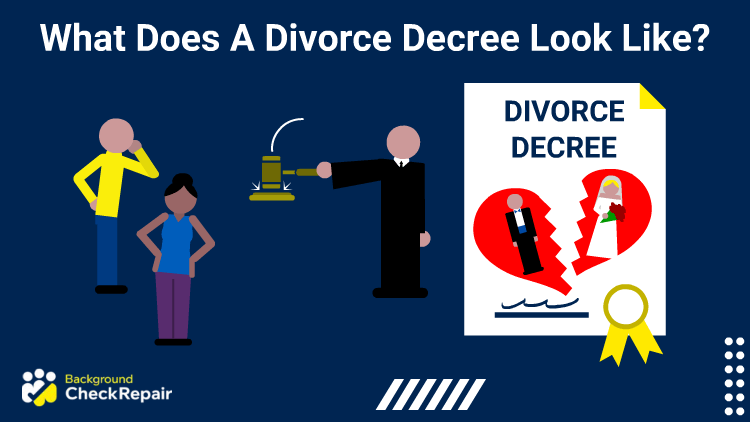 What does a divorce decree look like? The legal terms regarding divorce in the United States vary by state, and it can be confusing to know how some divorce decrees and certificates work in each state.

But, learning how a final divorce decree works is essential, especially if child custody, property division, and child support are involved.

Divorce is a very hectic process, and a party not aware of their rights or how the systems work might end up bearing the short end of it.

This complete guide explains exactly what does a divorce decree look like and how a final decree works.

A divorce decree binds both parties to the terms set by the judge. The judge will decide after listening to testimonies and looking into the evidence from both parties. Once the judge signs the document, the divorce is final.

There is a difference between a divorce decree and a divorce certificate. Divorce decrees vary on a case-by-case basis because the issues encountered in every divorce are different. For example, suppose the parties involved decide to participate in divorce mediation or settle their case in other ways.

In that case, the court will include the marital settlement agreement in the divorce decree.

Each state sets its own standard for a divorce decree. For example, California and New York divorce decrees are fill-in-the-blank forms tailored to suit individual cases. Additionally, some courts incorporate the settlement agreement terms into the decree, whereas others prefer to attach the agreement as a document on its own and reference it in the decree. In most states, divorce decrees will include:

The decree might also include specific instructions with regard to:

Once the judge agrees on all the terms and conditions for the divorce, for the final divorce decree to be complete, each spouse and any attorney involved must sign it and include the date they signed.1 After this, the judge will sign the decree, and in some courts, the clerk of the court will add a stamp to the final document, which will include an official seal of the court.

Related Reading: How to Find Out If Someone Is Divorced for Free Online in 60 Seconds

Yes. Divorce decrees are available to the public, and once the divorce is finalized, anyone can request a copy. Anyone who wishes to keep their information private should consider creating a marital settlement agreement which in some courts will not be part of public divorce records. In this case, the settlement agreement will only be used as a reference in the official divorce decree with a simple order for both spouses to follow the terms.

Alternatively, the parties involved have the right to request the court to seal the records. Sealing a divorce record will remove it from public records or protect any sensitive information that a divorce decree contains. A judge will be open to sealing any documents related to the parties’ health, financial status, or records containing information about children.

What Is a Divorce Certificate?

On the other hand, a divorce certificate is not a court document; rather, it is issued by the state, and its primary purpose is record-keeping. This document has very few details and may include:

A Divorce certificate will not have most personal details such as those found in a divorce decree. This certificate has similar functions to a marriage and birth certificate on the occasion that a party needs to prove that they divorced someone.

Anyone who has gone through a divorce can attest that it’s a long and arduous process. There are several forms that an interested party needs to provide to finalize their divorce, and they keep changing depending on how the case proceeds.2

The spouses are solely responsible for preparing the divorce decree to complete the case. The judge will grant the final divorce decree in three ways:

By agreement: if the two spouses agree on all divorce terms after filing the case, then they can prepare a final divorce decree and include their complete agreement. The defendant is required to find an answer and pay a filing fee. Finally, the two parties will sign a divorce decree and submit it to the judge, who can approve it without a hearing.

Most states use a general standard on final decree for divorce petitions.4 Each form must be filled out by the spouses advisably with a lawyer present and then submitted to the judge for reviewing and making the final decree.

Here is an example of a divorce decree from Pennsylvania: Form 13 Divorce decree form, with instructions, is common for most states. Each divorce decree form includes the names of the couple (defendant and plaintiff), and also includes the official date of the decree, signed by the court.

If an interested party wants a copy of a divorce decree in California, the best way to get it is through the County Superior Court in the region where the divorce was granted. The Court Clerk or the records office in that location will issue the party an official copy of an entire divorce decree as well as other related documents.

Most county courts will need the parties to provide written request records either by mail or in person, although this will vary according to the requirements of each office. The information required includes but is not limited to:

The party can obtain the case number through the court’s online search database or from the court personnel when they visit the office. To obtain a decree of divorce, a California resident needs to file several divorce forms,6 including:

What Does a Divorce Decree Look Like in NY?

If an interested party wants to file for divorce in New York, they must go through the New York Courts Websites, which also provide guidelines for the divorce process. The forms are also available on these websites. Here is a sample of a divorce decree in New York.8

The interested party has various options when filing for divorce:

What Does a Divorce Decree Look Like in PA?

An interested party can obtain a certified copy of a divorce decree through the Judicial Records Office either in person or via mail. The fee to get a certified copy is $41.58. Anyone wanting to file for divorce should file a complaint with the Office of Judicial Support, and if they are self-representing, they must file an Entry of Appearance form.5

Once the party has filed a complaint, the District Court Administrator’s Office randomly assigns the case to a judge, and the divorce process begins.

What Does a Divorce Decree Look Like in State?

Each state follows a common standard regarding divorce decree petition forms. All the forms should include the necessary information, including the names of spouses, division of debts and assets, custody agreements, etc. The VitalCheck system can be used to obtain official documents including marriage and birth certificates and divorce certificates online.

An enforcement tool: a divorce decree is enforceable, and when one party does not comply, especially on a time-sensitive matter, the other party can ask the court to enforce it.

Reference document: This document helps both parties when they disagree on issues such as alimony, parenting time, custody, and child support.

Where Can I Get a Certified Copy of Divorce Decree?

If two spouses get divorced in the United States, they can quickly get their divorce decree from the county clerk’s office in the court where the divorce was issued. The interested party needs to obtain the location and name of the clerk’s office, which can be found in the original court order or their divorce.

Alternatively, the interested party can obtain an official copy of a divorce decree through the office of vital statistics, vital records, or the registrar where the divorce was filed. The name and location of the nearest vital records office can be obtained by reviewing the website of the Centers for Disease Control and Prevention (CDC).9

The judge must sign the final decree of divorce for the case to be over. Until the judge signs the case, the divorce is not complete.3 It’s the responsibility of the two parties and their lawyers to present a decree of divorce before the judge for it to be signed.

In an uncontested divorce, the attorneys prepare a final degree which will be presented to the judge, who more often than not will sign the document directly. However, the judge might request adjustments in some areas of the divorce, in which case the decree will need to be redrafted. In a contested divorce, the judge will prepare the final decree and hand it over to the attorneys. In some cases, the judge will look at the testimonies and evidence provided and then give a ruling after a trial. Once the judge has signed the divorce decree, a party can appeal or ask the judge to make changes within the first thirty days. If there is no appeal, then the divorce will be final.

How Long Does It Take for a Judge To Sign a Divorce Decree in State?

The time it takes for a judge to sign a divorce varies from state to state. Here is a table that indicates the time a judge has to finalize a divorce hearing.

In summary, a divorce decree is a document that contains all the conditions of the divorce such as wealth and debt distribution, child support, and maintenance. It is also proof that the marriage is over.

Knowing the answer to, what does a divorce decree look like, can help individuals who need to obtain this document for legal reasons.

Frequently Asked Questions About What Does a Divorce Decree Look Like

Once the judge signs the decree and the decree is uncontested for thirty days, the divorce is final.

When Does a Divorce Decree Expire?

A decree does not expire.

Once Divorce Papers Are Signed, Can They Be Changed?

Does a Divorce Decree Have To Be Signed?

Yes. A divorce decree has to be signed by both spouses and the judge; otherwise, you will remain married.

Who Fills Out the Final Decree of Divorce?