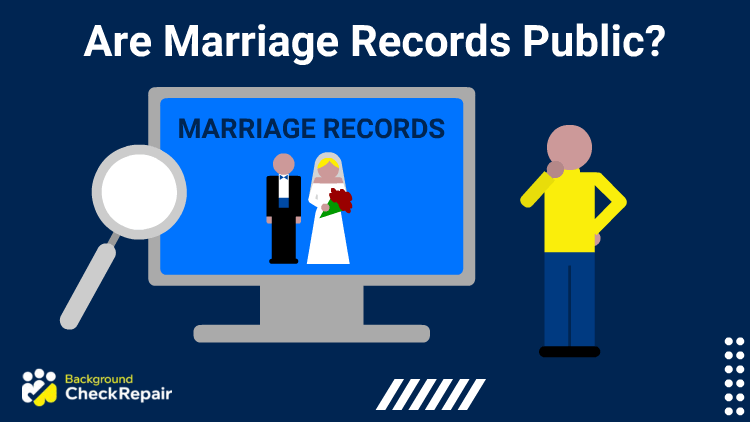 Although finding a free records search is slightly more difficult than the paid options available, it is possible to search these records at completely no cost.

Keep in mind that no matter the method used, certain state laws can prevent some records of marriage from being found.

How Do I Look Up Marriage Records?

Each state and even county will have different laws regarding if marriage records are public, which agency maintains the marriage records and who has access to the records. This poses several major problems when it comes to trying to figure out if someone is married.

Normally, there are two main methods for locating public records. The first is to go through the agency in charge of the record and make a records request. For example, those interested in learning about a specific individual’s criminal history information only need to contact the court where any criminal proceedings would have taken place and make a request with the court clerk using the name of the individual.

For a small fee, all relevant court documents would be given to the individual that requested the documents provided that none of them were sealed or expunged. However, for marriage certificates, vital records agencies generally hold those documents. Each state’s laws about whether or not marriage records are public are different. This means that should an individual make a request using the name of the individual, even if that individual was married and the marriage license was filed at that courthouse, there is a strong possibility that these documents will not be returned.

If the state that the marriage would have taken place in is known, then going the court records search approach is probably the most reliable. Be sure to check the marriage record laws in your state first, to avoid paying money for a search that yields no results, the court clerk will be able to share information on what records are public in your state.

Use the list below to search for state vital records to get started.

Since going directly through the courts is unreliable when it comes to marriage records, many individuals may think to go through a private background check service. Many background check services offer to find marriage and divorce records for a fee. Often, when these searches are performed and no results are returned, many people will come to the conclusion that that is because no marriage license exists. However, this is not always the truth.

Private background check services won’t have access to more information than the average person unless they are FCRA certified and consent and an SSN are provided.3 The majority of these services will only ask for a first and last name because they do not legally have access to these private databases and are only searching public databases.

In the case of marriage licenses the same court databases will be searched, once again resulting in no documents being returned.

Although the results can be unreliable, performing a free search is a solid option as there is little to be lost if no results are returned. Many background check services will offer free trials or single searches for free. Keep in mind that if no results are found regarding someone’s marriage status this doesn’t guarantee that they are not married because they may have been married in a state with non-public marriage licenses.

Another option that may seem appealing is searching through vital records for evidence of a marriage. Although marriage licenses are filed with the courts, marriage, and divorce records are also considered vital records. The exact agency in charge of vital records in each state varies but it is usually the state health department or a similar agency.

Unfortunately, vital records are not a great source of marriage record information. In general marriage and divorce, vital records can only be requested by those named in the marriage or divorce and in some cases the adult children of the named parties. This is exactly as it sounds, the marriage is kept secret and the records of it will only be accessible by those involved in the marriage.

How To Find Out If Someone Is Married

Most people asking “are marriage records public,” may be frustrated to find how many different laws can make this question difficult to answer.

Although going through official records to find out if someone is married can be a frustrating endeavor, there are other indirect methods that may be worth a try. This can be especially useful for those who are trying to find out more information about someone they met online or in other situations where the person could potentially be lying about their identity.

One method that can be effective is performing a social media background check on someone. These days many people will have secret social media accounts that they keep separate from their main social accounts.

How To Check Marriage Records for Free

Using a private background check to check marriage records for free is likely the best course of action for most people. This will give individuals the best chance of uncovering marriage licenses from anywhere in the country, as opposed to going through court records which will only have records for that particular court.

Although current marriage licenses may be difficult to locate if not impossible, Individuals who are trying to find historical marriage information will have different options available. In most states marriage, divorce, and other vital records are considered public information if the records themselves are old enough.

The cut-off date will vary depending on the state; some states will allow access to vital records that occurred before 1950 or before 1900 in some cases. This can be useful for individuals who are trying to find information on deceased relatives or other similar pursuits.

Various agencies will be in charge of maintaining historical records, such as the state historical society or even the department of health. For example in Kansas, vital records can be requested from before 1911 through the Kansas Historical Society.1

How To Get a Copy of Marriage Certificate

Many people are interested in knowing, are marriage records public, because they need to obtain a copy of a marriage certificate.

Obtaining a copy of a marriage certificate is an extremely easy process in most states, assuming the individual requesting the copy is one of the parties involved in the marriage. Although a marriage license and a marriage certificate are two different documents (A license being issued to the couple by the courts and the certificate being a document that acts as the vital record for a marriage) They both fall under the privacy laws that make marriages confidential information in many states.

A marriage certificate is usually considered a vital record and should be held by each state’s vital records office, usually the department of health. Each state will have slightly different methods to request a copy but for the most part, the following steps should work in almost all states.

Most vital records offices will have their own website that will have information on how to request different kinds of records. Example: To find information on vital records requests in Colorado, simply access the website of the Colorado Department of Public Health and Environment.2

In most cases, simply following the onscreen prompts will allow individuals to make vital records request completely online. This will either be done by entering in basic contact and payment information with the records office, or by entering the same information with a third-party records provider such as Vitalchek.

Divorce records will follow the same laws as marriage records; in some states they are public and in others, they are not. Generally, the states that do not consider marriage licenses and information to be public, will also include divorce records as well.

If wondering how to find my divorce date online for free, simply use the same methods used to find marriage records such as court records or a private background check service.

Finding public records is relatively easy when it comes to things like criminal records or tax records. However many states view marriage license records as being confidential and will only allow involved parties to request the information. Although the answer to the question, are marriage records public, is often ‘no,” there are still a few other ways to find marriage information.

Is There a Way to Learn How to Obtain Free Public Marriage Records?

The best way to obtain public marriage records for free is through a background check service that offers a free trial.

How Do I Find a Free Marriage License Records Search Options for My State?

Marriage license records are not always publicly available. However the best option is to use a private background check service or go through the court house where the marriage license would have been filed.

Who Can Tell Me How To Check Marriage Status Online?

Marriage status can be checked online via court records in states with public marriage laws.

Is There a Way for How To Find Out If Someone Is Married or Divorced Free?

The best way to find out if someone is married or divorced for free is to use a private background check service to see if there is a publicly available divorce record or marriage license record.

How Can You Find Out if Someone Is Married in Another State?

The best way to find out if someone is married will likely involve going through court records in the county where the marriage would have taken place. However, marriage records are not always considered public information.

Is There a Marriage License Lookup Provided by the Government?

Unfortunately there is no national marriage license lookup due to state confidentiality laws surrounding marriage records. Some states may allow individuals to search for marriage records through the state courts.

How Can I Find Out When Someone Got Married for Free?

Where Can I Learn How To Check Marriage Status Online for Free?

Using a private background check service is the best way to check marriage status online for free, however state laws can prevent this information from being publically available in some cases.

Are There Public Marriage Records Free Online for Anyone to Search?