Do Dismissed Charges Show Up on a Background Check? (Do 2 Things)

If you’ve ever been charged with a crime, but had the charges dropped, you may be worrying, do dismissed charges show up on a background check?

This can be stressful, since what shows up on a background check has the potential to prevent you from gaining employment, volunteering, and even obtaining new housing (if your tenant background check is rejected by a landlord). While it can be unfair and even borderline discriminatory in some cases, for even arrests without convictions, a dismissed charge can be detrimental to your reputation and job prospects.

Fortunately, there are two steps to take depending whether or not these charges may show up on your criminal history record obtained by employers.

Before doing the above, step one is to follow the process to get a background check that includes criminal records.

The important thing to remember is that many employers will make the legal distinction between a dismissed charge and a conviction. This is because the word “dismissed” means that there wasn’t enough evidence to follow through, which can indicate that you were completely innocent of the wrongdoing.

Simply put, knowing do dismissed charges show up on a background check can help prevent problems when you’re undergoing a criminal history search. Start with the information above and then proceed with the instructions found below.

Does a Dismissed Case Stay on Your Record?

Many people mistakenly think that once a charge has been dismissed, whether before or during a trial, that their record is ‘clean.’ However, that’s not the case. Charges that were dismissed are still part of the public record, so the answer to whether they will still show up on a background screening is yes… sometimes.

Depending on state laws, even though charges were dismissed, they may still show up on your criminal record via a background screening.3

However, there are exceptions.

Every state has different laws concerning charges that were dismissed, so it’s important to check your local jurisdiction. For example, some states apply ‘double jeopardy’ rules in specific situations. This guarantees that you will not be prosecuted at a later date for the same crime. Usually the jeopardy rule is applied after a trial has begun, so if your charges were dismissed after the trial started, then double jeopardy applies.

In addition, sometimes a prosecutor can dismiss charges before a trial ‘with prejudice.’ This typically means that there wasn’t enough evidence to go to trial, but that the authorities have reasons to believe that the person is guilty. In that case, the charges could be reissued. Understanding the Difference Between Charged vs. Convicted on Your Records

There is an important distinction between a charge and a conviction. A charge is simply an accusation, while a conviction is legal proof of guilt.

Many employers will recognize this distinction in states where ban the box laws aren’t passed, and a job application (or other formal request like an adoption or rental application) will ask if you have ever been convicted. This will allow you to answer “no,” if your charges were dismissed. However, if an application asks if you were ever ‘charged’ with a crime, the dismissal does not matter and you’ll need to answer truthfully on employment background checks’ consent form.

If formal charges are pending against you after your arrest, a criminal record will show up on your criminal background checks once you attend court for your arraignment. These remain in place even after a dismissal. However, you may be able to remove them through expungement.

Of course, a dismissed charge is much better than having a conviction on your criminal record. A conviction means that you were guilty of the crime, which will often impact whether you can pass a background check for a number of employment positions. But, it’s important to remember that not all employers or jobs will be impacted by a conviction. And, if you do have a conviction on your record, you can find out how long does a misdemeanor stay on your record, or any other crime, and once you know how long the conviction will impact your background check, you can make arrangements to work around it, or contact an attorney to help remove it.

The Difference Between Dropped Charge vs. Dismissed Charge

Dismissed charges are different from dropped charges. In general, the prosecuting attorney for the state has the power to “drop” charges, while a judge or prosecutor can “dismiss” them. 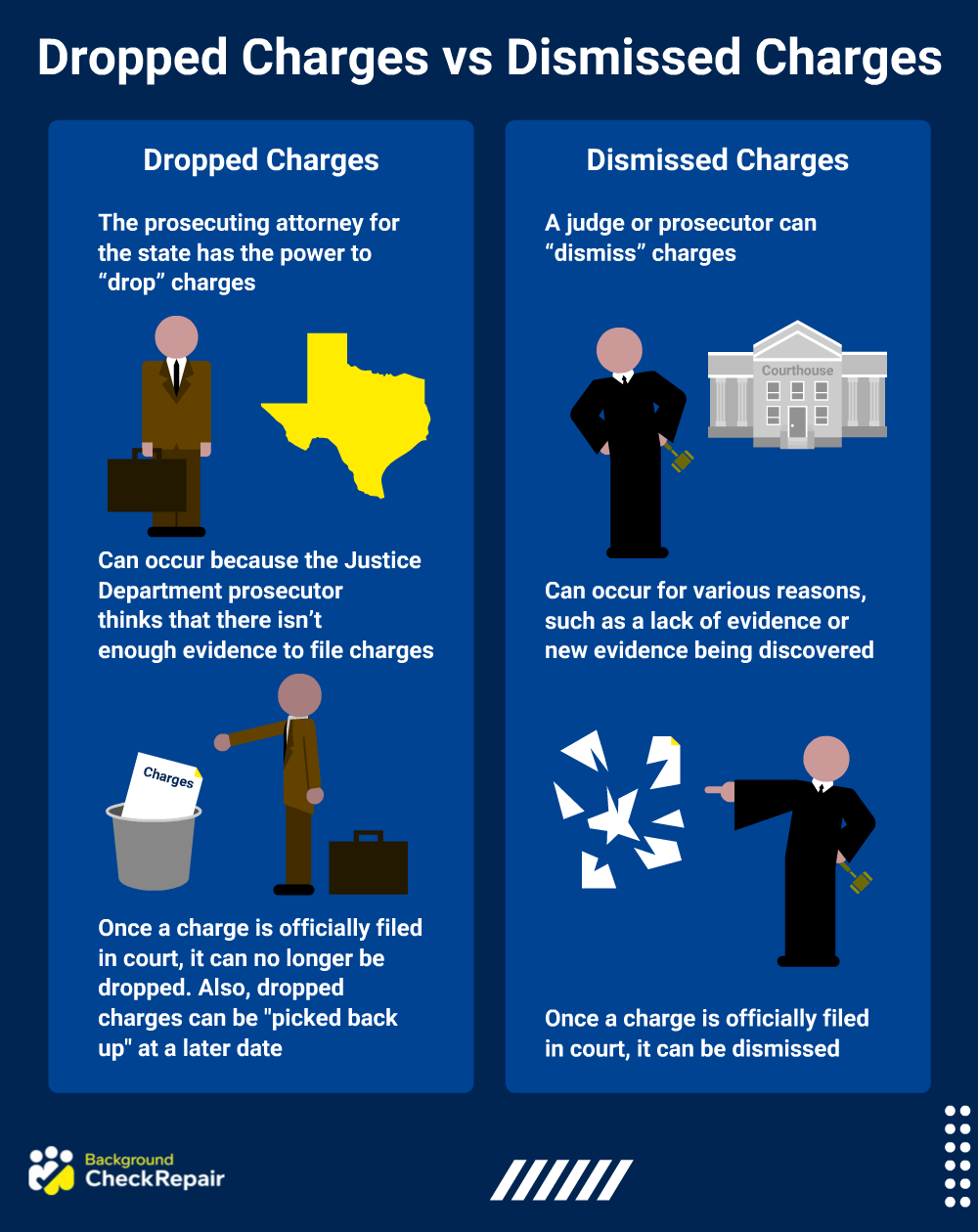 Charges are usually dropped because the Justice Department prosecutor thinks that there isn’t enough evidence to file them, or he or she believes that some part of the evidence isn’t factual, after you’ve been arrested.

However, once a charge is officially filed in court, it can no longer be dropped, but it can be dismissed. Also, dropped charges can be ‘picked back up’ at a later date.

Dismissed criminal charges can occur for various reasons, including additional evidence that is found, lack of evidence, uncooperative or missing witnesses, being found not guilty, or new suspects coming to light. You may have also been charged as a juvenile, and your charges were eventually dismissed during adulthood.

Getting a Dismissed Charge Expunged: Clearing Your Background Check Record

Whether or not your charges were dismissed or dropped, the arrest record will still be available in some types of background checks.

A level 2 background background check (and some other criminal history searches) reveals national criminal records on the federal level, such as a felony, as well as arrests and criminal records in other states. A level 2 check will also reveal personal background information, such as current and previous addresses, credit history, marital status, and educational history.4

Criminal history on both level 1 and level 2 checks will reveal misdemeanors, arrest records, incarceration records, sex crimes, and judgments in a civil court.

Regardless of the way the charges were dismissed, unless legal action to expunge the record is carried out, the charges remain on a background check for your employer (or potential employer) to see.

However, individuals can apply for expungement, which removes and ‘destroys’ the record, and prevents it from appearing on a level-2 background check. This means federal background checks will no longer include the criminal records in question.

Additionally, level 1 name-based searches in the criminal courts of local jurisdictions (nearby counties) will no longer show criminal records.

In most states, you can get a dismissed charge, including an arrest record, removed from your official record, which allows you to deny that you were ever charged with a crime.

This is an important step, especially when the distinction between a charge and conviction is not made clear on an application. To file for expungement you will need to complete the following:

Step 1. Contact the local court that was involved in your case.

Step 2. Follow the legal process outlined for filing for expungement.

In the US, if you are in custody for more than 72 hours, without any formal charges, you are required to be released. Since no formal charges were made you will not necessarily have a criminal record, but this could still show up on your arrest record. This is often known as a “RAP” sheet, meaning Record for Arrests and Prosecutions, which can often show up on background screenings.1 The answer is yes. These records are entered into the criminal court clerk database. However, you can make sure that these un-convicted charges are removed by following your state’s guidelines.

Getting a dismissed charge expunged is a bureaucratic process that must be done correctly, with various steps completed exactly. Imagine the DMV, but with even more forms.

The steps vary from state to state, but generally can include:

Depending on the type of offense you were charged with, as well as where it occurred, you may also consider hiring an attorney, to help ensure your record is expunged, since the process for expungement may be more difficult in some states than others.

In some states, dismissed charges will automatically be expunged after a certain period of time. For example, in Maryland, criminal charges, civil offenses for certain drug possession, and serious driving violations will be automatically expunged after 3 years, requiring no effort by the accused.2 And, court records that have been expunged or purged by the county in Kentucky are not legally allowed to show up on background checks.

If a court decides to grant your request and expunge your record, your dismissed charge can no longer be used as legal grounds to deny you employment.

However, not everyone is always eligible for expungement. Certain types of offenses, such as murder, sexual assault, and violent crimes, cannot always be sealed, even if the charges were dismissed. If you have been charged with other criminal convictions within a certain time period, such as the past 10 years in some states, you may also be ineligible.

For example, in the state of Maryland, if you received Probation Before Judgment (PBJ), you cannot get your records expunged if you were charged with another offense within 3 years. Furthermore, you cannot apply for expungement if you have any pending charges against you.5

To determine if your criminal record can be cleared, check the state or county court website specific to your area, to see which offenses are eligible.

Most experts recommend that you work with criminal defense attorneys before your arraignment date, so that you can try to avoid charges from being formally filed and processed in court. Even if the charges are later dismissed and you are not convicted, you will still have a court record. The record will state that you were not convicted, but it will appear on a background check.1

To determine whether or not your arrest records will show up on a background screening, you should check with the applicable laws in your area. Depending if you were tried on the federal, state, or local level, and how the respective jurisdiction stores criminal conviction records, these records may or may not be made accessible to the public, according to legal restrictions and regulations. In fact, many states choose to not post live or current arrest records.

Before applying to a new job, it may be helpful to run a background check on yourself, so that you can see what a screening reveals. This will help you have more confidence in the job interview process, and help you determine if you need to take action concerning your record.

You can also simply search the state or county criminal court records to determine whether the charges are on your record.

It is important to note that the databases used by a background check company may sometimes be incorrect or outdated. For instance, these databases may still include information on a crime that was later expunged or sealed from public records. For this reason, running a background check to see whether a dismissed charge has been removed is a good idea.

Fortunately, there are two different ways to determine whether they show up on your criminal history record obtained by employers: identifying the distinction between the question of being ‘charged’ or being ‘convicted,’ and the best solution, expungement.

Before panicking over do dismissed charges show up on a background check, remember that you have options for preventing these charges from altering your job security, adoption, residency, or other chances.

3BackgroundChecks.com. Is a misdemeanor on your criminal record? Nd. 6 December 2021. Web. <https://www.backgroundchecks.com/personal/support/is-a-misdemeanor-on-your-criminal-record>

5The People’s Law Library of Maryland. Which records can be expunged? 1 September 2021. 7 December 2021. Web. <https://www.peoples-law.org/which-records-can-be-expunged>