If Charges Are Dismissed Do You Have a Criminal Record? (The Truth) 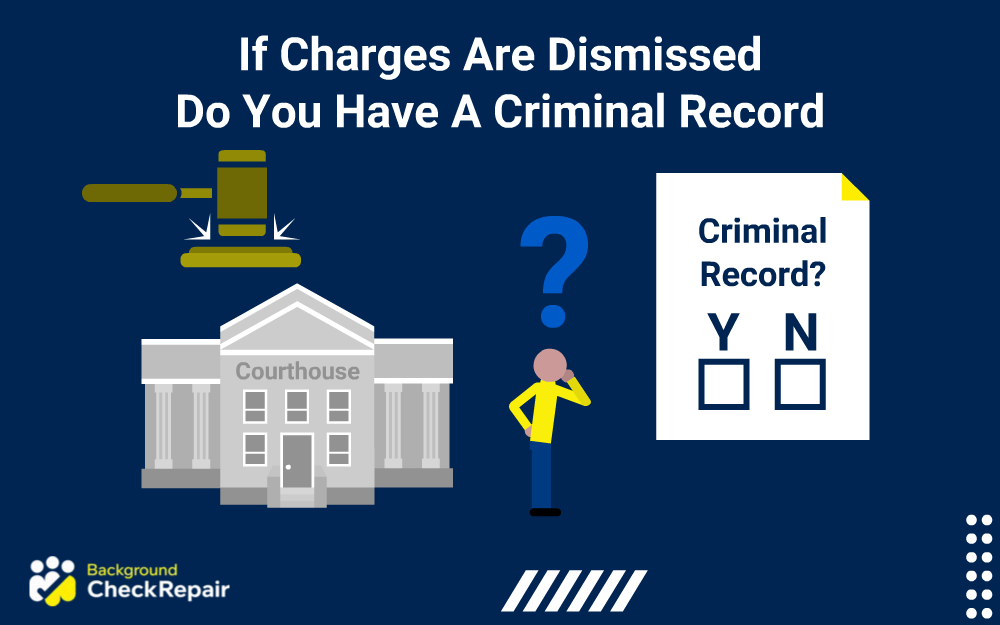 If you have ever been arrested for a crime, you may be wondering: if charges are dismissed, do you have a criminal record? You may think that a dismissed criminal charge doesn’t have any repercussions as it relates to your record.

In fact, it can be easy to assume that you will only have a criminal record if you are charged and convicted of a crime (if you were charged but not convicted the rules can be different).

Here’s the truth about dismissed charges and how they appear on criminal records and background checks.

What Is a Dismissed Charge?

To start off, what is a dismissed charge? If a charge against you is dismissed, it means that the prosecuting office or attorney has decided not to pursue a judgement against you for one reason or another. There can be many reasons for a criminal charge to be dismissed.1

Additionally, a pending charge may show up on a background check before it can be officially dismissed.

The only similarity between the two is that both dismissed and dropped charges will appear on a criminal record, even when you don’t have any other criminal convictions.

Why Are Criminal Charges Dismissed?

Charges can be dismissed for a number of reasons. In some cases, there isn’t enough evidence to prove that you actually committed the crime in question. A dismissal can also occur if the available evidence wasn’t retrieved in a legal manner.

Here are many of the reasons why criminal charges are dismissed:

Can a Dismissed Charge Get Reopened?

However, if a case was dismissed with prejudice, that means it cannot be tried again and is closed for good.

A judge will usually dismiss a case with prejudice if there is a sign that the lawsuit is senseless. This can also happen if the matter can get resolved outside of court.

It is important that you know what type of dismissal your charge received. If you aren’t sure, you can check with the office of the judge who presided over the decision or your attorney.

There is a very common question: do dismissed charges show up on your background check?

Yes, if charges are dismissed, they will still appear on your criminal record. It’s tempting to think that a dismissed charge will not appear on a criminal record because it’s not a criminal conviction. But the truth is that the records of your arrest will show up on your record. If they are on your record, that means they will also show up on your background check and be available to the public.

The only way you can remove these records is to have them sealed or expunged.

Related Reading: How do I know if I have been charged with a crime?

How Long Do Dismissed Charges Stay on Your Criminal Record?

Unfortunately, a dismissed criminal charge will stay on your record permanently if you do nothing about it. This means that even if you don’t have any other criminal convictions, you will still have a criminal record.

How Do You Remove A Charge Dismissal From Your Record?

The only way to remove a dismissed charge from your criminal record is to have the records expunged or sealed. While expunging a charge is the ideal option, not everyone is eligible. For those who cannot have their record expunged, sealing the record may be an alternative choice.

Both options come with strict guidelines that need to be met before you can get a charge removed.

When a dismissed charge is expunged, it is completely wiped off of your record. The charge or arrest record will no longer be found on your criminal record or on any other background check. While this is the ideal way to remove a record, most states require a waiting period after the charge is dismissed before considering expunging it from your record.

Once the waiting period is up, you will still not be guaranteed an expungement. Most states require you to meet strict guidelines before the dismissed charge can be expunged. Guidelines vary from state to state.

Most states will consider you eligible to have your dismissed charge expunged if you do not have a felony conviction within the last 5 years, or if you haven’t been convicted of a crime other than a misdemeanor.

If you are not eligible to have your dismissed charge expunged, you can attempt to have the charge sealed. When a case is sealed, it is “set aside.” A sealed case will not be available for the public to view and will no longer be present on your criminal record. 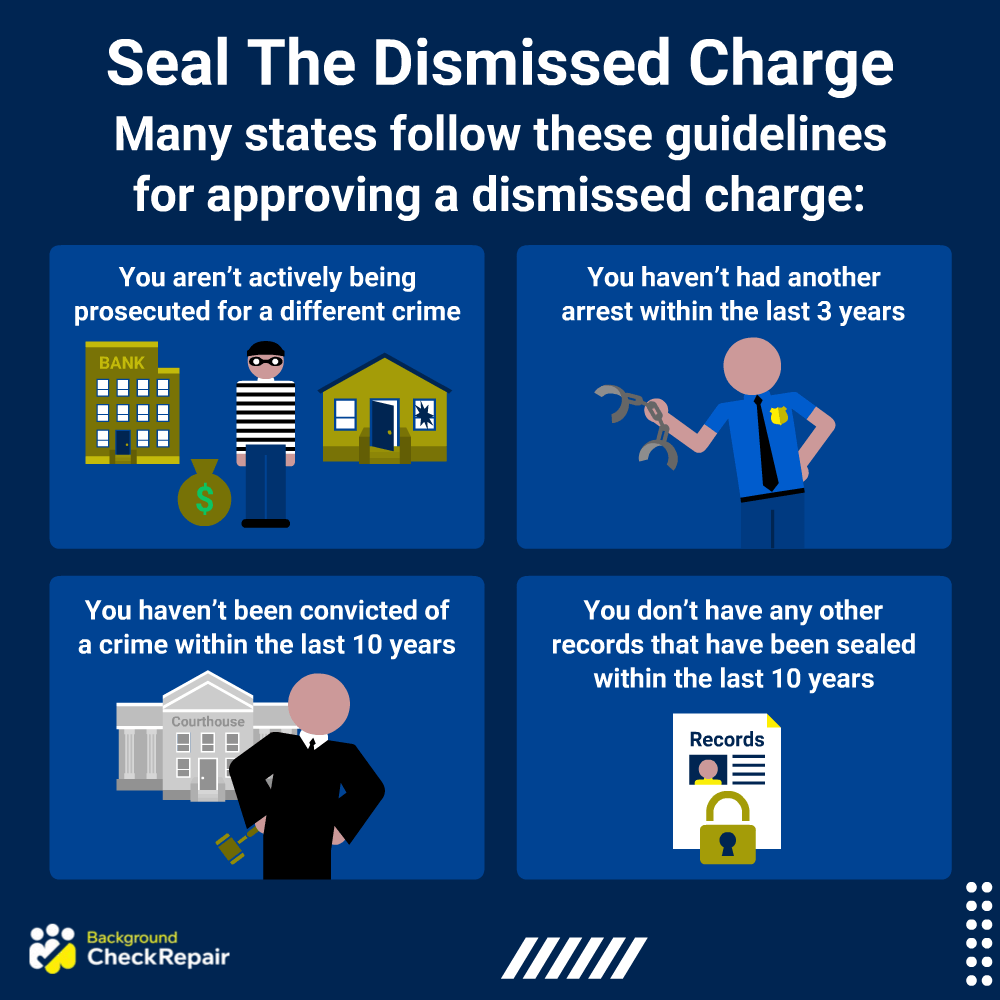 You aren’t eligible to seal a charge until 3 years have passed from the time of the arrest. As with expunging a case, guidelines for sealing a case vary from state to state. However, many states follow these guidelines for approving a dismissed charge:

If you have a dismissed charge on your record that you want removed, double check the guidelines in your state to see if you qualify. Alternatively, you can reach out to an attorney to discuss your options.

It should also be noted that currently, there isn’t an option to remove a dismissed federal charge from your record. However, the principles of Federal Prosecution outlines dismissal options.

Can You Get a Dismissed Record Removed If You Have a Prior Conviction?

Unfortunately, you will not qualify for removal of a dismissed record if you have prior criminal convictions. Most states require that, in order to be eligible for expunction or record sealing, you do not have a criminal conviction within the last 10 years.

Is It Better to Get a Charge Expunction or Have the Record Sealed?

Having a record expunged is more difficult than having it sealed, and is not available to a majority of people. The best way to determine your options and eligibility is to contact a local attorney.

When Should You Try to Get a Dismissed Charge Removed from Your Record?

Having a criminal record, even if it only consists of dismissed charges, can be harmful to your reputation.

Here is a full list of reasons to get a dismissed charge removed:

Keep in mind that while all of these reasons are valid, you may still qualify for these events despite a dismissed charge on your criminal record. If you have questions regarding whether you need a charge dismissed, you should contact an attorney.

Will a Dismissed Charge Hurt Your Chances of Getting a Job?

A dismissed charge may not hurt your chances of getting a job. When employers run background checks, they are usually looking for convictions. Just because you have a dismissed charge does not mean that you will be disqualified from the position.

How to Explain A Dismissed Charge to a Potential Employer

If you made a mistake, simply tell the truth and use it as an opportunity to explain how you have bettered yourself. Having a dismissed charge on your criminal record does not always mean you are no longer eligible for a position.

How Do You Find Out If You Have a Criminal Record?

If you aren’t sure if you have a criminal record, you can get a federal background check on yourself as long as you follow the guidelines for how to lookup charges on someone (including yourself). By using a federal search, all criminal records will be revealed, regardless of which state or county the arrest or charge occurred in.

How Do You See Your Criminal Record with a Background Check?

Once you know what type of background check you need, you can order it for yourself with some of the following options:

Knowing what is on your background check can help you fix any errors or prepare for questions that may come from the items found.

Even charges dismissed in court will be visible on your criminal record. While this may not be the end of the world, it is important to know that these charges will still appear on a background check. If you are eligible, dismissed charges can be removed from your record by having them expunged or sealed. You should confirm your eligibility by checking with your state or an attorney. Keep in mind that both of these options require waiting periods, and in some cases, will have fees and legal proceedings associated.

If you do nothing about a dismissed charge, it will stay on your criminal record indefinitely in the form of an arrest record. If you have a dismissed charge on your record, it doesn’t mean that you won’t be eligible for things like government housing or a new job. Ideally, though, you should try to have this record removed to make sure that your reputation is as clean as possible. If you aren’t sure whether you have a dismissed charge on your record, you can order a criminal background check on yourself. This will provide you with all of the information that a potential employer or landlord will see, and give you an opportunity to correct any mistakes that you might find. So, if you’ve ever wondered, “if charges are dismissed do you have a criminal record,” now you know.

1HG Legal Resources. 2021. Why Criminal Charges Against You May Be Dismissed. 14 October 2021. Web. <https://www.hg.org/legal-articles/why-criminal-charges-against-you-may-be-dismissed-53440>

2National Adoption Foundation. 2021. What are the Requirements for Adopting a Child? 14 October 2021. Web. <https://fundyouradoption.org/resources/what-are-the-requirements-for-adopting-a-child/>