In New York City, central booking is used to process individuals who have been arrested by law enforcement, and the first thing many people wonder is how to find out if someone is in central booking.

When trying to locate a person who has been arrested in New York, it’s actually easy and fast to find the information. Although the term “Central Booking” applies only to New York, other states and cities offer similar search capabilities for processing arrested people. This guide outlines everything needed to find someone who has been booked…in minutes.

Search Central Booking for Someone in Seconds

After an arrest, things can happen very quickly as the legal process begins swiftly. Knowing how to find out if someone is in Central Booking is an important part of the process in locating someone. By simply clicking one link, anyone can locate an arrested person in NYC in seconds.

What is Central Booking?

In New York City, when an individual is arrested by a police officer, they are first taken to the precinct closest to where the crime was committed. At the precinct, the initial processing will begin with the accused providing basic information to the arresting officer, who formally enters the information.

The booking process is the criminal record, and includes:

After the initial processing has been completed, the accused person will then be transferred to Central Booking, if the arrest occurred in NYC. In New York City, Central Booking is located at the criminal court in the county where the arrest took place.

However, if the arrest occurred in another part of the state, the booking process is carried out at the local police or sheriff’s department. (Related Reading: How to find out what someone was arrested for.)

Since each Borough in New York City is its own county, the person being booked will be taken to the court that belongs to the borough where the crime took place. For example, if the alleged crime occurred in Brooklyn, the suspect will be taken to Central Booking at the Kings County Criminal Court. NYC Central booking offers online tools for finding people who were arrested in the last 24 hours, but after that time frame, users must search inmate lookup tools to find someone in custody.

At Central Booking, additional processing will take place and eventually an arraignment will be set. The arraignment hearing should be within 24 hours of the arrest, and will happen in the same criminal court where the suspect is being held.

Find Someone is Central Booking

If the person being searched was arrested in New York City, the process for how to find out if someone is in Central Booking is as simple as calling the Court Arraignment Clerk in the county where they were arrested.

Users simply give the clerk the name of the person who is being searched.

Keep in mind that when someone is arrested, the arraignment hearing will likely be the first chance that loved ones will have to come in contact with them.

Detailed steps for finding someone in central booking are outlined below.

Step 1: Find Out Which County (Borough) the Arrest Occurred

Since each of New York City’s boroughs is its own county, so as long as the borough where the crime or arrest was committed is known, identifying which Central Booking the person has been taken to shouldn’t be a problem.

The next and final step is to contact the arraignment clerk at the criminal court where the individual is being held.

Be sure to call during normal business hours, and have the name of the individual ready to help speed up the process. The arraignment clerk will be able to confirm if the individual is being held in the court or not, as well as provide information on when their arraignment hearing will take place.

Contact information for the Central Booking of each New York City criminal court is listed below.

How Does the Jail System Work?

Understanding the incarceration system, from the time someone gets arrested to released or paroled, can be beneficial. Inmate lookup tools are available in every state, and make it i easy to find out if someone is in jail. By knowing the process and steps, individuals can get a better understanding of timelines, what to expect, and how and when to contact the person who is being held.

What Happens Following an Arrest? The criminal court system for New York City contains online information about each county, and links to access central booking.

After the arraignment hearing the person may be released if the bail amount is paid, if not, they will remain there until the criminal trial is completed. Criminal justice reform laws, particularly bail reform, recently passed in New York have changed some of the processes involved in central booking (see below).

What Happens After the Trial?

Once the trial is completed, a number of things can happen to the individual that has been arrested. If they are acquitted, they will be released immediately. However, if they are convicted, the sentencing will determine where they will go next.

For shorter sentences, usually less than two years they will remain in the same county prison they were in while awaiting trial. For more serious crimes that result in a longer sentence, they will likely be transferred to a state prison to complete their sentence.

What is VINE (Victim Notification Network)?

The service can contact the individual via text message or using the VINE app.

VINE can be a useful service for both victims and the loved ones of incarcerated people to get up to date information at any time, such as whether or not an individual is in police custody.

How to Look Up Federal Inmates

Unlike searching for inmates at the state level, which can be difficult and requires a different approach based on the state, searching federal inmates is easy using an online database. The Federal Bureau of Prisons keeps an updated and searchable online database which can be accessed at any time. Individuals can use the database to find basic information such as where the inmate is being held and information on how to contact them.

Detailed steps for how to use the Federal Inmate Locator are outlined below.

The inmate locator is operated through the Federal Bureau of Prisons. The website has various information about federal prisons as well as the searchable database. Inmate lookup can be conducted at the Federal Bureau of Prisons website, which is free to use and offers a number of resources. Inmate searches can be performed using the Bureau of Prisons register number, or by name.

From here, simply perform the search by filling out the required fields. Results will be available immediately. When searching for an inmate by name, it is helpful to have the middle name, race, age and sex of the person.

Finding out if someone has been arrested is easier than ever with so many states and counties using online records and searchable databases to compile inmate information. Although Central Booking refers to New York alone, many states offer inmate search tools that offer the same search capabilities. The process for finding an inmate varies from state to state but usually involves going through the state’s department of corrections website and locating the searchable inmate database.

If one is not available, look for a database maintained by the county where the arrest took place. The county sheriff’s office usually offers inmate lookup tools that can be accessed online.

What is Central Booking? (Is It the Same as A Search Through Court Records?)

Those trying to answer the question of “How to find out if someone is in Central Booking,” it’s helpful to understand exactly what Central Booking is. The term central booking generally refers to a county jail where an arrested person is processed before their arraignment.

In some jurisdictions, such as New York City, the term is used to describe the second part of the processing that takes place at the county criminal court, rather than the initial processing at the police precinct.

What Happens in Central Booking?

While in central booking, an accused person is visited by a staff member of the Criminal Justice Agency (CJA), who interviews the suspect to gather specific information, including: 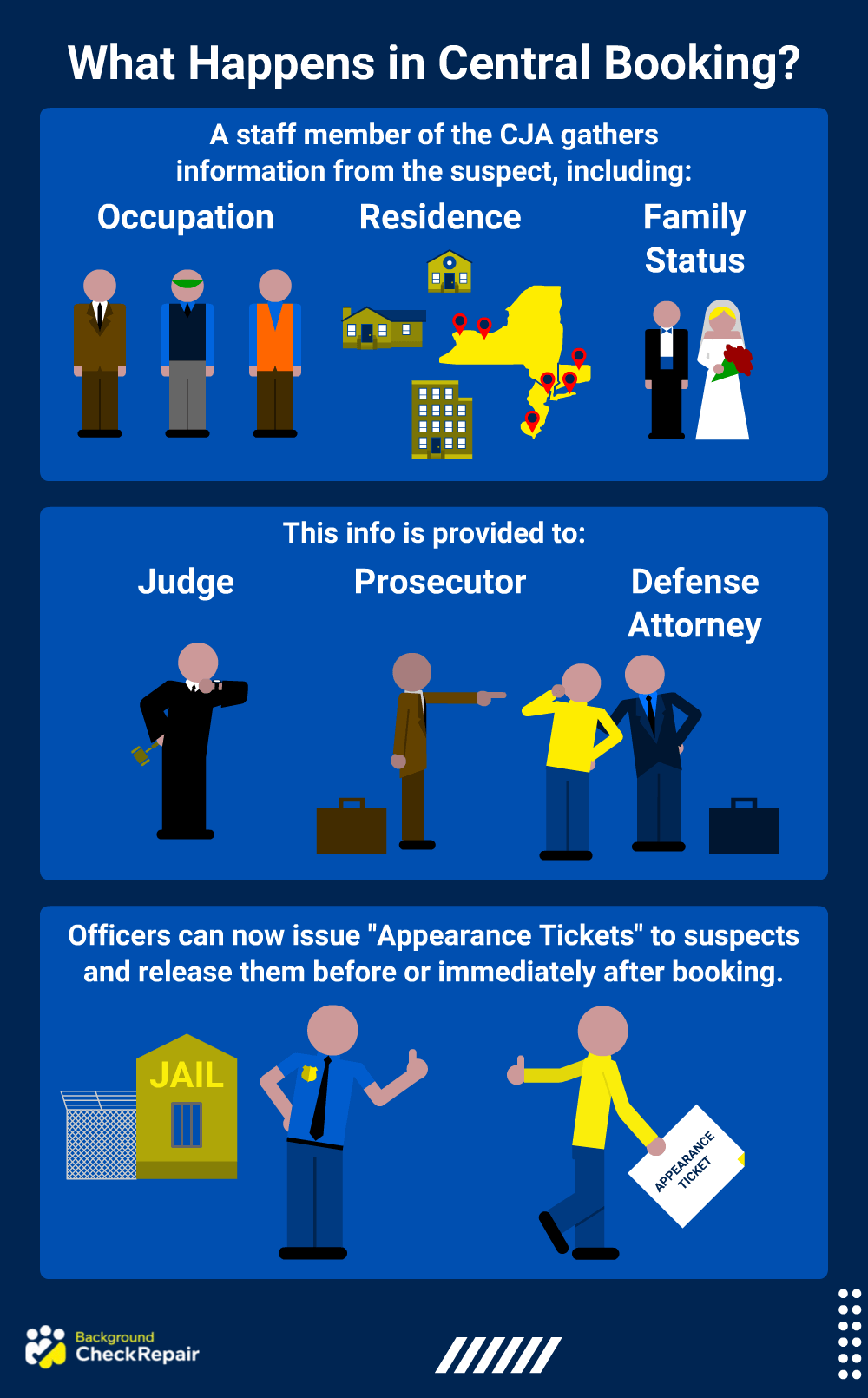 This info is provided to the judge, prosecutor, and defense attorney during the arraignment, and although this occurs in central booking, other areas of New York also include the CJA agents.

Recent bail reform laws have changed the options in central booking, and now officers have the option to issue “Appearance Tickets” to suspects and release them before or immediately after booking.

Find Out if Someone Was Booked in County Jail

Step 1: Determine which County the Arrest Occurred in.

The first step is to determine which county the crime and arrest occurred in. Unless a federal crime was committed, the individual will be arrested and booked in the jail for the county the arrest took place in.

For example, if an arrest was made in Oakland, the accused will be processed and held in the Alameda County Jail. Searching the county website for services or the department of corrections inmate search provides a good starting point for how to find out if someone is in central booking.

Once the county has been determined, simply access the website for the county jail. This can usually be found by googling: [County Name] jail.

For example the search for an inmate arrested in Oakland would be: Alameda County jail.

In many cases, the county website will have information on what services are available to find inmates in county jails. This is usually under headings such as:

For example the Alameda County website has a “services,” section on the website’s home page. On the services page there is a link to take visitors to the inmate locator page. Every website is different but performing the search should be self-explanatory. Generally, the first and last name of the individual is sufficient to complete a search (for a federal warrant search more information may be needed).

Knowing ahead of time how to find out if someone is in central booking, can alleviate a lot of the stress and uncertainty that comes from a loved one being arrested, and finding out as much information as possible early on in the process can make a huge difference later on.