Do Infractions Go on Your Record? The Good News (Civil, Traffic, Driving) 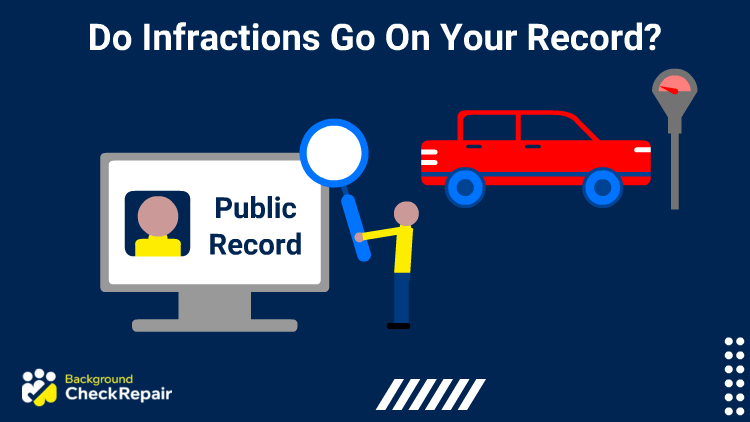 It’s very easy to make a mistake and be charged with an infraction, and with background checks increasing in frequency, many people wonder do infractions go on your record?

These minor violations might seem trivial, but depending on the severity of the charge, whether or not an infraction goes on your record depends on a number factors.

The good news is that most infractions, especially those related to traffic tickets, won’t be part of what shows up on a background check.

This guide explains the different types of civil, traffic, and driving infractions, their consequences, and how they can impact employment and other records checks.

What Is Infraction Meaning in Law?

In law, the term “infraction” is generally used to denote a minor law violation, infringement or breach.19 This term is reserved for the most petty offenses.16

Compare and Contrast: Infraction VS. Misdemeanor

Most people are aware of the terms misdemeanor and felony as they relate to criminal offenses and convictions. In fact, approximately 33% of adult citizens in the United States have a criminal record.2

Felony convictions are for very serious convictions, while a misdemeanor is a less severe offense.

Related Reading: If charges are dismissed do you have a criminal record?

Infraction Crime Example: What Is an Infraction Ticket?

Infractions often take the form of a ticket, or they may be filed as a complaint.16 Some of the most common infractions that may result in a ticket are traffic violations, such as:16,19

There are also many types of infractions which are non-traffic violations, such as:16

An infraction ticket is given to an individual to notify them of their offense and present them with the option of either appearing in court to contest the infraction or paying the associated fine.

While felony and misdemeanor charges regularly go to trial and result in jail time, probation, or other rehabilitative efforts, infraction crimes are treated in a much more lenient fashion. In most cases, infractions are written on a ticket or filed as a complaint which will result in a small to moderate fine (e.g. In the state of California, the maximum fine for an infraction is $250), no jail time, and no criminal record.16,19

An individual may be assigned community service in some instances.10

The most important thing that an individual can do after receiving an infraction ticket is to pay the fine. If the individual intends to contest the infraction, they must show up in court to plead their case in front of a judge.

Related Reading: Does a restraining order go on your record?

In most cases, if the fine is paid beforehand, the individual need not go to court. Note that if the fine remains unpaid, the person can be charged with a misdemeanor, which changes the nature of the case.10 Aside from paying the infraction fine, the other significant repercussion is that infraction traffic tickets do result in points against the person’s driving record which can have a cascade effect on other areas (e.g. employment, insurance).4

Is a Speeding Ticket an Infraction?

A speeding ticket is an infraction, and in fact, is one of the most common infractions. It is considered a moving traffic violation and is typically punished with a fine, as well as points against an individual’s driving record.17,19 A very extreme speeding ticket may result in a misdemeanor charge.

Do Infractions Go on Your Personal Record?

To answer the question “Do infractions go on your record?” it is necessary to first address two other questions:

Though many people may think of criminal records when they hear the phrase “on your record,” driving records are also regularly updated and often accessed for employment purposes.

Continue reading to learn which infractions may show up on a person’s record.

Do Infractions Go on Your Criminal Record?

This is very good news, meaning that infractions do not appear on a person’s criminal record.5

Do Civil Infractions Go on Your Record?

An infraction is a lesser offense than a misdemeanor and does not result in criminal punishment. Thus, infractions are classified as civil citations rather than criminal and do not appear on a criminal record as long as the individual pays the fine.5 The next section looks at how a person’s driving record may be impacted by infractions, or civil citations.

Do Infractions Go on Your Driving Record?

Driving records are a frequently looked at the indicator of personal behavior and integrity. For individuals wondering “Do infractions go on your record with the Department of Motor Vehicles (DMV)?”21 the answer is: it depends.

There are different types of infractions, many of which are not traffic-related, such as walking a dog off a leash, fishing or hunting without a license, or drinking alcohol in public.16 As these offenses do not bear directly on an individual’s ability to drive responsibly, they do not appear on the person’s driving record.

For traffic-related infractions, such as driving over the speed limit, running a stop sign, or failing to provide proper proof of registration and insurance, the implications are a bit different, and most traffic infractions will be recorded by the DMV and show up on an MVR report.5

Do Traffic Infractions Go on Your Record? Do Infractions Go on Your Record for Immigration Purposes?

U.S. Citizenship and Immigration Services (USCIS)23 is the government agency which regulates immigration into the United States.12 Any person wishing to immigrate to the U.S., temporarily or permanently, is required to undergo a FBI fingerprint background check to obtain a visa or green card. These background checks will examine an individual’s criminal record extensively and will pull DMV driving records as well.

Related Reading: Do warnings go on your record?

Therefore, any traffic infractions (particularly moving violations) which appear on the MVR report will be taken into consideration for immigration purposes. Individuals completing an Application for Naturalization (Form N-400)22 should be prepared to disclose moving violations, as well. Though traffic tickets resulting in misdemeanors or felonies are likely to impact immigration status, traffic infractions typically won’t.3

How Long Does an Infraction Stay on Your Record by State?

Generally speaking, traffic infractions stay on an individual’s driving record for three to five years, but there is actually quite a bit of variation from state to state (see table below).1 Though many states use specific time periods for grades of traffic violations, the DMV point system is regularly used to attach points to a person’s record for each offense. The number of points assigned for various infractions can also vary by state.9 To view each state’s vehicle laws and code, consult the table below.8 Some insurers will overlook first or one-time offenses that are minor, but an accumulation of points on a driving record is almost guaranteed to raise insurance rates.13 Insurance premiums are typically impacted for three to five years, and this can vary by insurer, so rate comparisons are crucial.11 Minor traffic infractions (speeding, improper passing, etc.) can be expected to increase insurance rates by 5 to 30%.20

How Long Does a Ticket Stay on Your Record for Insurance Companies?

In most states, traffic ticket infractions stay on your record for three to five years, though the range is one year to forever.13 Even for infractions which remain on the driving record beyond the average range, many insurers are unlikely to weigh them against drivers.

Related Reading: How long does a DUI stay on your record?

More severe traffic violations which fall into the misdemeanor category (DUI, reckless driving) will affect insurance rates longer.20 Very few people have a personal history entirely free of error, and it is easy to fall prey to worry about how mistakes in the past may affect present or future prospects. For individuals wondering “Do infractions go on your record?” the good news is that these minor offenses do not go on a person’s criminal record but may appear on a driving record check.

Frequently Asked Questions About Do Infractions Go on Your Record

An infraction ticket is incurred for criminal violations which do not meet the criteria for misdemeanor classification. Infractions do not result in criminal convictions but are listed instead as civil citations. Thus, only driving infractions are likely to show up on a background check, and that’s only if the background check pulls the MVR report.

Misdemeanors, on the other hand, are filed as criminal citations and will show up in any background check which examines criminal records, if the misdemeanor occurred within the state’s lookback period.

Some examples of traffic infractions versus traffic misdemeanors include:5,16

Does a Civil Traffic Violation Go on Your Record?

A civil traffic violation is synonymous with a traffic infraction, as infractions are filed as civil citations. A civil traffic violation may include offenses such as failure to wear a seat belt, parking violations, speeding tickets, or failure to yield, and these minor offenses can show up on an individual’s driving record. However, they do not show up on a criminal record.5,6

Does Your Driving Record Get Wiped Clean When You Turn 18?

In most states, a person’s driving record clears automatically after a specified length of time (usually three to five years) since the violation. Many states use a point system where the points drop off gradually over time.7,14

How Long Does It Take for a Speeding Ticket To Be Erased?

In most states, speeding tickets remain on a person’s driving record for three to five years. The length of time can vary depending on how much over the speed limit the individual was driving. There are some states which are exceptions and do not automatically clear driving records after a specified period of time has elapsed.

Attending driving school can sometimes help to get a ticket removed from the driving record more quickly.11

7Levy, J. (2022, February 3). When You Turn 18 Do Violations Clear Off of Your Driving Record? Jerry. Retrieved July 16, 2022, from <https://getjerry.com/questions/when-you-turn-18-do-violations-clear-off-of-your-driving-record>

10The Nieves Law Firm, APC. (2022). What’s the Difference Between an Infraction, Misdemeanor, and Felony? The Nieves Law Firm. Retrieved July 16, 2022, from <https://thenieveslawfirm.com/blog/different-types-of-charges/>

11Ochalla, B. (2022, February 14). How Long Does a Speeding Ticket Stay on Your Driving Record? QuoteWizard. Retrieved July 16, 2022, from <https://quotewizard.com/auto-insurance/how-long-does-speeding-ticket-stay-on-driving-record>

18Voigt, R. (2022). What is a Nonmoving Traffic Violation? Do They go on Your Driving Record? Driving Laws. Retrieved July 17, 2022, from <https://www.drivinglaws.org/resources/traffic-tickets/traffic-laws/do-non-moving-traffic-violations-appear-a-driving-record>

20The Zebra. (2022, January 11). How 26 Common Traffic Tickets Raise the Price You Pay for Car Insurance. The Zebra. Retrieved July 15, 2022, from <https://www.thezebra.com/resources/research/traffic-tickets-raise-insurance-rates/#top-violations-by-state>

23U.S. Department of Homeland Security. (2022). What We Do. U.S. Citizenship and Immigration Services. Retrieved July 20, 2022, from <https://www.uscis.gov/about-us/mission-and-core-values/what-we-do>