Does a Citation Go on Your Record? Maybe & Here Is How Long It Stays 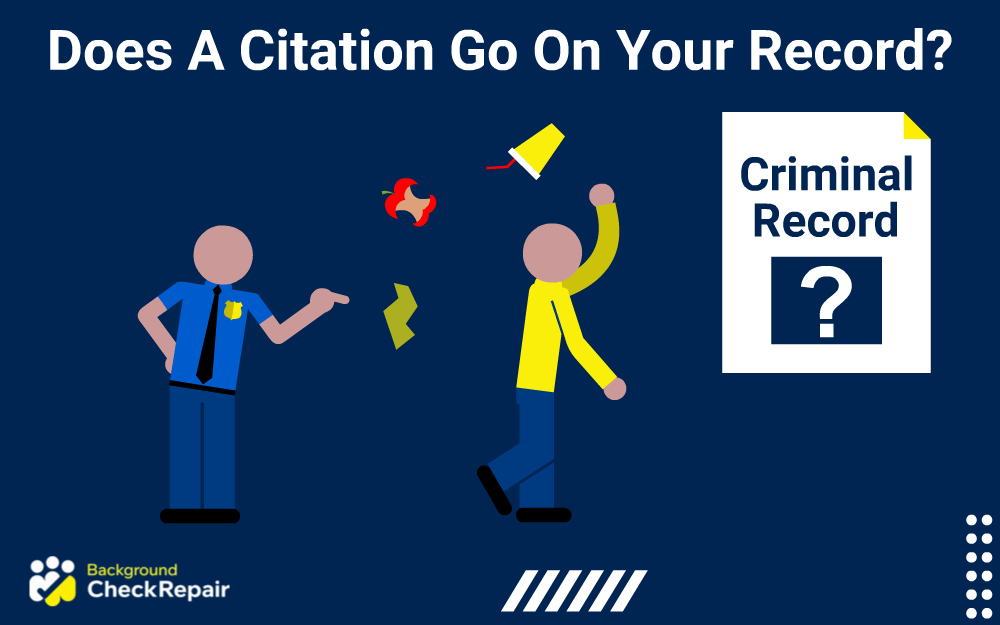 After getting pulled over and receiving a citation, the first question that many people have is, does a citation go on your record?

The key is understanding what records will include a citation and how long it will remain.

There is a difference between a driving record and a criminal record. But, since many people associate law enforcement involvement with crimes, it can be confusing. Common questions include:

In general, a written citation will go on an individual’s driving record, at least for a while. But, it won’t be present on a criminal record unless the violation classifies as a misdemeanor or felony.

BUT, there are a number of factors that determine what records will include a citation, and how long it will stay there and be able to be seen by potential employers, insurance companies and others who search public records.

This guide explains all the ins and outs of being cited by police, so that drivers can know the real answer to “does a citation go on your record?”

Is a Citation a Ticket or a Warning? Driving Ticket Vs Citation

A ticket and a citation are essentially the same things. Individuals who break traffic laws and are stopped by the police will likely receive a citation for violating the law. This is generally done for minor traffic offenses such as failing to stop completely at a stop sign, or minor speeding offenses.

The key is whether the car was in motion during the infraction. For example, a parking ticket will not show up on a driver record or criminal record because the vehicle was not in motion.

If a law enforcement officer chooses to issue a warning instead of a citation for a moving violation, the warning given will usually be verbal. This means that there is nothing else for the individual that committed the traffic offense to do and there will generally be no record of the offense ever occurring.

There is one expectation to this however, certain states now require officers to issue written warnings, mainly so that there is an official record that the stop was made.

Although citations are fairly simple, there are still plenty of questions like “How will a citation affect my insurance”, and “does a citation go on your record”.

What Does it Mean to be Given a Citation?

Being given a citation is basically being asked to pay a fine for committing a crime. When most people talk about being given a citation, they are referring to the fine they have to pay after violating a traffic law and being issued a ticket by a law enforcement officer that witnessed the violation.

Although not extremely serious, individuals who have been issued a citation have technically committed a crime. However, when it comes to traffic laws there are additional levels of punishment based on the crime. Although many people think of crimes as either being a misdemeanor or a felony, when it comes to traffic laws most states make an additional distinction.

Does a Citation Go on Your Insurance? Does a Citation Go On Your Driving Record?

However, there is one main way in which a citation will be issued but not appear on a driving record.

When receiving a citation for violating a traffic law, the “innocent until proven guilty,” principle still applies. This means that individuals have the right to take the citation before a judge and argue their case as to why the ticket was given in error or any number of reasons that the citation should be voided.

In this case, the citation will be dropped and it will be removed from the record, similar to when charges are dropped before a criminal trial.

Keep in mind that paying the citation is essentially an admission of guilt and will result in the citation going on your record.

When people ask, does a citation go on your record? They are likely referring to their driving record, but keep in mind that more serious traffic offenses that amount to a misdemeanor will also show up on an individual’s criminal record.

Does a Non-Traffic Citation Go on Your Record?

Generally, only traffic citations will go on your driving record.

Things like parking tickets or tickets given for expired license plates will not be present on a driving record.

Does a Parking Citation Go on Your Record?

Parking citations will not go on your driving record. Since the citation does not reflect on the driving safety of the individual it will not show up on a record.

There is also the additional issue of parking citations being given when the car is unoccupied, meaning there is no way to tell who was driving the car previously and a citation will not be given out based on a guess.

Whether or not a citation is permanent will depend entirely on the jurisdiction where the citation was issued. Many states have a point system to keep track of driving offenses.

In these states, it is fairly common to allow individuals to lower the number of points they’ve accumulated to avoid any negative effects of having too many points on their record, such as their license being suspended. However, even in states with a point system, there will still be a record of the offense, even if the offense is no longer affecting their driving record.

Other states will remove citations from an individual record entirely after a certain amount of time, usually 2 years or more.

Furthermore, there is still the issue of what the citation was for. Minor offenses are more likely to be removed than those that are more serious.

How Do You Get Out of a Citation?

There are a number of different ways to get out of a citation, depending on the jurisdiction. Some states will allow for an appeals process, however, every state will allow individuals to contest citations in court.

Generally, there will be instructions on how to do so on the citation itself. Usually, the process amounts to pleading not guilty to the charges, such as speeding. From there an arraignment date will be set and the individual will need to appear in court before a judge and plead their case.

Keep in mind that the officer that issued the citation will also likely be present and they will likely have evidence of the offense occurring.

What is the State ‘Point’ System for Drivers?

Some states have implemented a point system in recent years to more effectively keep track of traffic violations being committed by an individual. Although every state is different, the system usually works like this:

Each state is different but usually, the process works similarly to what has been outlined above. This is done to help get dangerous and reckless drivers off the streets while assigning different values to different offenses since traveling 30 mph over the speed limit is more serious and dangerous than rolling through a stop sign.

Getting a citation can be a frustrating experience and one that will often lead to more stress as questions continually pop up. Things like “does a citation go on your record?” And “how will this affect my insurance?” are all simple questions to answer as long as individuals know their local laws.

Does A Citation Go On Your Criminal Record?

In certain cases, a citation will go on your criminal records. Mainly, if the citation ranks as a misdemeanor or felony.

Does A Traffic Citation Go On Your Record?

Traffic citations will go on your driving record and possibly criminal record if a felony or misdemeanor was committed.

If You Pay A Citation Does It Go On Your Record?

Yes, paying a citation will result in the citation appearing on your record.

Does A Misdemeanor Citation Go On Your Record?

Yes, a misdemeanor citation will go on your driving record as well as your criminal record.

Does A Criminal Citation Go On Your Record?

Does A Drinking Citation Go On Your Record?

Drinking citations will sometimes go on a driving record but it will depend on the state. They will not show up on a criminal record if the individual was underage at the time of the citation.

Does A Citation Go On Your Permanent Record?

Sometimes, how long a driving citation goes on your record will depend on the jurisdiction where the citation was issued.

When Does A Citation Go On Your Record?

A citation will usually go on your record as soon as the fine is paid. This is because there is a possibility of the citation getting dropped if the individual chooses to appeal.

Does A Resource Citation Go On Your Record?

Yes, all citations except for parking violations will show up on your record.

Does A Citation Go On Your Record For Disorderly Conduct?

Does A City Citation Go On Your Record?

If A Citation Is Not Handed To You Does It Go On Your Record?

Yes, this will depend on the citation that has been issued, but not being there to accept the citation does not prevent it from showing up on your record.

Whether or not citations are permanent will depend on the jurisdiction and the reason for the citation.

How Do You Get Out Of A Citation?

The best way to get out of a citation is to fight it in court. Details on how to plead not guilty to a citation will usually be included in the citation itself.

What Does It Mean To Be Given A Citation?

Being given a citation is like being issued a fine for wrongdoing.

Does A Citation Go On Your Insurance?

Traffic violations will go on your insurance and affect insurance premiums. However, parking citations will not.

Do You Have To Go To Court For A Citation?

No, individuals only need to go to court for a citation if they are trying to get the citation dropped.

What Is A Citation From A Police Officer?

A citation from a police officer is a fine for committing a low-level crime.

Does A Warning Citation Go On Record?

Is A Citation Bad?

Although citations are not good, they are usually not very serious and are only given out for minor offenses. Accumulating too many citations can result in your license being suspended.

We use cookies to ensure that we give you the best experience on our website. If you continue to use this site we will assume that you are happy with it.Ok