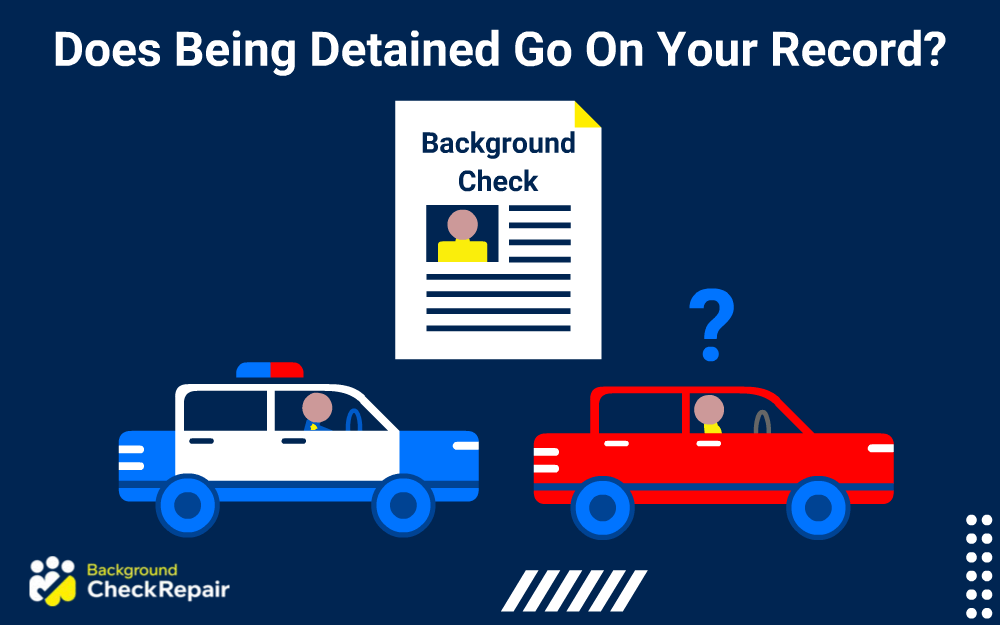 Does being detained go on your record? The answer can be yes or no, which can make it tricky to know for sure whether being held by the police will be part of a person’s public record.

The key is knowing where and how to look for the record.

Since states have different laws concerning detainment records and public records in general, knowing how to confirm a detainment record can be important when checking criminal records for something that might cause someone to have a failed background check.

This guide provides all the information anyone needs to answer “does being detained go on your record”, quickly and accurately, so you can answer:

By far, the easiest answer is simply checking your record to find out quickly (often in minutes).

Does a Police Detention Go on Your Record? Find Out

Technically, detention is defined as being prevented from free movement, but most often it refers to law enforcement officials forcibly keeping someone in custody for questioning if incriminating evidence is lacking.1

So, does being detained go on your record? It all depends on whether the detention is accompanied by a criminal charge or conviction.3

When detained, a report is made, but the report does not become part of their criminal history record unless they are convicted of a crime. Later on, the report will be destroyed according to the state law of the region where the detention was made.4

However, a copy of the police report will exist until then.

Related Reading: Does a police report go on your record?

However, when a person is arrested, the arrest record goes on their criminal record (Learn how to find old arrest records and how to find recent arrests). When they are processed and booked in a county jail or police station, an official record is keyed into the agency system and becomes available to the public in many states.

In some instances, when a record of the arrest is not filed with the office of the local District Attorney for charges, a record of their detention is instead filed, and the decision to do so reflects as detention only for criminal identification within the state’s department of justice.2

Although this is confusing, the main thing is knowing that anyone can check their own background public record and find out if detention will show up.

Legal Requirements for Detention and Obligations of the Police Upon Detention

Detention goes hand in hand with an ongoing or recent criminal offense in which the person in custody is suspected of involvement.3

A detainee has a right to an Attorney unless statutory exceptions come into play. However, when an individual is not detained, the police are allowed to question them without informing them of their right to an attorney, even when they intend to arrest them. The police cannot take a person into custody for investigative purposes unless they are deemed reasonable in line with the circumstances.

An officer’s grounds of belief must be probable and reasonable for them to detain or arrest a person. When the sufficiency of belief is met, the investigative detention is justified by law.3

Regardless of these provisions, law enforcement officers have quite a bit of leeway in getting “probable cause” and extending detainment.

Does Being Detained Show up on a Background Check? (Does Detention Show up on Your Record?)

So, does being detained go on your record? Unless a person is charged with and convicted of a crime, being detained does not appear on their background check since it is not included in their criminal records.

However, when they are arrested, it shows on their background check.

How Long Can You Be Detained? Detained Person Law (All 50 States)

A person can be detained without charges for a maximum of 48 hours. During the 48 hours, the police officer may question the person regarding the circumstances leading to their detention. Any law enforcement from either state or federal agencies may ask the questions. However, under the Constitution of the United States, the individual has a right not to answer any questions. They have the right to remain silent but should state that they are invoking their right.

They can also choose to request for an attorney to give them representation during questioning. The police cannot punish the individual for refusing to answer questions.

Detainment laws are both similar and different in various states. The following table contains each state’s official detainment law:

How Do You Know If You Are Being Detained?

If the person answering law enforcement inquiries asks whether or not they are free to leave and are told no, they are being detained.

However, it is voluntary detention if they are told yes but do not leave the scene2

What is a Limited Criminal History Check? (How to Check for Detention Records)

A limited criminal history check is when an individual or concerned party searches the state’s criminal records to ascertain whether they have a class A misdemeanor or felony arrest against their name.

The process is fairly easy to complete. By contacting (or searching) the local sheriff’s office or police department, anyone can request a criminal background check.

In addition, the Freedom of Information Act allows anyone to request copies of police reports.

To conduct a criminal history search on yourself (get a copy of my criminal record), follow these steps:

Step 1. Click on the link in the table below for the state of residency.

Step 2. Click on background check forms, or criminal history forms provided and follow the instructions on filling out the information.

NOTE: be very careful to enter accurate information. A misspelled name or smudged fingerprints (if required) can cause background check delays.

Step 3. Pay the processing fee associated with the criminal history search. Generally, a state background check will cost from between $20-$40.

Step 4. Obtain the results to find out “does being detained go on your record?’

Does being detained go on your record…it certainly can, but anyone can find out for sure by doing a background check on themselves to see if the detainment shows up.

Does Detention show up on a Background Check?

It usually does not, but if the detention is related to an official charge, that charge will appear. Arrests do go into criminal records, but some states limit whether they show up on background checks.4

How Long Can Police Detain You for a Felony?

Most states have a 48-72 hour maximum, excluding holidays and weekends.

How Long Can Police Detain You for a Misdemeanor?

A maximum of 48 hours, excluding weekends and holidays.

Can Police Detain You as A Witness?

What’s the Difference Between Detained vs. Convicted?

Conviction is the process of finding if an individual is guilty of a crime in a court of law, whereas detention is the custodial deprivation of liberty of the individual.

How Long Can Police Detain You for DUI?

There are different types of DUI and different levels of severity. However, the booking process can take anywhere from a few hours to over 10 if a person is arrested for driving under the influence. Because detainment laws (and restrictions) are different in each state, however, there’s no one rule.

Does Being Detained for no Probable Case go on Your Record?

This can be difficult to answer because each state retains different laws and statutes regarding detainment information. The best thing to do is to get a criminal background check to see if the detainment shows up, and contact an attorney.

Anything that is contained on juvenile records (even a permanent record) is sealed.

How Long do Arrests Stay on your Record?

Arrests generally stay on the record for 3-5 years, depending on the severity of the criminal act.

Does Juvenile Detention go on Your Record?

Juvenile records, including detention, are sealed, so they are not public.

1Arrest vs. Detention: How to Tell Whether You’ve Been Arrested or Detained. (2022, 27 January). Nolo. <https://www.nolo.com/legal-encyclopedia/arrest-vs-detention-how-tell-whether-you-ve-been-arrested-simply-detained.html>

2What does it mean to get detained? (2021, 20 March). Movie Cultists. <https://moviecultists.com/what-does-it-mean-to-get-detained>