Do Warnings Go On Your Record? Only When The Police Do This (Driving) 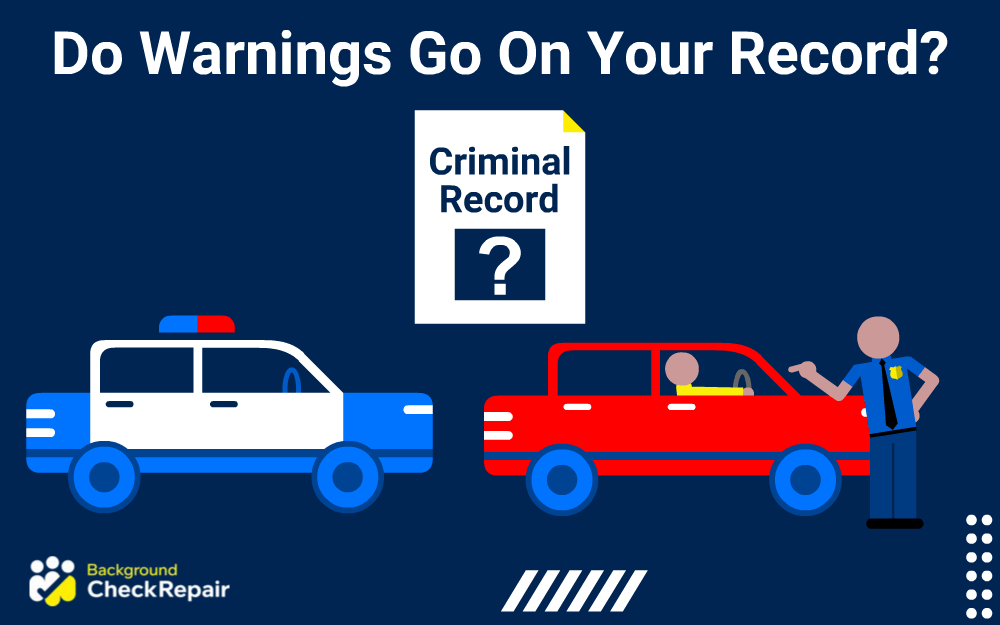 Getting pulled over by police for a traffic violation can be annoying, but anyone lucky enough to get off with a warning may wonder, ‘do warnings go on your record?’

The answer to this much-asked question is a little tricky, because if police write out an actual warning, then yes, it can go on the record. However, if the warning is delivered verbally, it may not.

Unfortunately, when the driving record is impacted, that can trigger increases in insurance rates, so it’s important to know what will show up on the record.

Related Reading: Do police reports show up on background checks?

Not only does the police action dictate whether or not a warning goes on your record, but every state also has its own set of legal driving codes and statutes, which can make a ‘blanket’ answer less than accurate.

This guide outlines the answer to “do warnings go on your record,” precisely by providing all the types of warnings and access to all 50 states’ Department of Motor Vehicles so that anyone can check their driving record quickly and easily to see if a warning has shown up.

What is a Warning? (Will a Warning Show Up on a Background Check?)

A warning is what many officers will give instead of a citation for traffic violations, making it the best possible outcome of getting pulled over for most people. Rather than get a citation which is essentially a fine for breaking a traffic law, some officers will simply let individuals off with a warning and give out no punishment of any kind.

Likewise, a written warning (and other low level moving violations) can part of what shows up on a background check of the MVR report.

So, if a person is applying for a commercial driver’s license (like a DOT background check), these violations will be able to be seen by both a potential employer and your insurance company, which can result in a failed background check.

Officers will generally make this clear during the traffic stop, however, in some cases, officers will give a written warning. While a verbal warning will result in the officer telling the individual that they are letting them off with just a warning and sending them on their way, a written warning is slightly different.

Written warnings are being given out more and more in the last few years, as law enforcement agencies keep a closer watch on officers. Written warnings carry the same penalty as a verbal warning: nothing. The only difference with a written warning is that there will now be a police record that the individual was stopped and why they were stopped.

Keep in mind that warnings are most commonly associated with traffic violations, but an officer may give warnings instead of citations for lots of different minor violations.

Do Warnings Go on Your Record? Understand Types of Warnings

Individuals given a warning by the police will probably have one question: Do warnings go on your record? In general, written warnings will go on your driving record. This is simply because there will be a written record of the infraction. Of course, this only applies to written warnings where there is a paper trail of the event occurring. However, there are several different kinds of warnings in many jurisdictions, some include:

Do Warnings Go on Your Driving Record?

Verbal warnings will never go on the driving record. The only kind of record that might show up on an individual’s Department of Motor Vehicles (DMV) record is a written warning. However, even if an officer gives a written warning for a traffic violation, it is extremely unlikely the warning will go on your DMV record.

Law enforcement agencies and the DMV don’t normally share records regarding warnings and most DMVs are only interested in actual citations, in case a license needs to be suspended.

Do Written Warnings Go on Your Record?

Those wondering do warnings go on your record, are usually concerned with it impacting their insurance rates. Some written warnings may go on a driving record but it is extremely rare. In general, a written warning will only show up on a police record, as the name of the individual who received the warning is associated with the record.

Do Verbal Warnings Go on Your Record?

A verbal warning will never go on your record. Many officers give out verbal warnings specifically to avoid doing the paperwork that comes with citations and written warnings. Or, to provide a reminder to a law abiding citizen to be more careful in the future, if the potential infraction was minor. This means there will be no official record of the infraction ever taking place.

Do Traffic Warnings Go on Your Record?

Traffic warnings will generally not show up on a driving record. Law enforcement agencies don’t normally share this information with the DMV and the DMV is rarely interested in warnings anyways.

Do Speeding Warnings Go on Your Record?

Speeding warnings, warnings for running a stop sign, warnings for distracted driving, and any other driving-related warnings are just a warning. There will be no official record of the infraction taking place unless a written warning was issued. Even with written warnings, they will only show up on police records, not on driving or DMV records.

Do Court Warnings Go on Your Record?

It is extremely rare for a court to give a warning instead of a sentence. This is normally done for very minor infractions or first-time offenders of minor crimes. However, being forced to appear in court will certainly show up on a record. Keep in mind, that this is different than when charges are dismissed.

Does a Written Warning Ticket go on Your Record?

However, a comprehensive background check that searches police records may show the warning.

For those who ask do warnings go on your record? There is a simple way to tell if a warning ended up on the record or not. Simply get an MVR. Getting a Motor vehicles report (MVR) is fairly easy in every state in the U.S. The trickiest part can be identifying the agency that is in charge of these records.

Generally, this will be the Department of Motor Vehicles or Dept of Transportation. However, some states leave MVRs in the control of the secretary of state’s office or another agency such as the Department of Revenue.

The first step is to locate the DMV website for your state, this can be easily achieved using the links provided in the table below. For example, the Nebraska Department of Motor Vehicles is in charge of all MVRs for the state.

Once on the DMV website, simply locate the driving records page. This can sometimes be called an MVR, a driver record, or something similar.

Once located, be sure to gather all the documents that are needed to help speed up the process, this usually just includes a driver’s license and sometimes a social security number. There is also often a fee associated with making a records request. For example, the Nebraska DMV requires a driver’s license or SSN to perform the search as well as a fee of $7.50.

In order to make sure that a written warning has not been placed on the Motor Vehicles Report, the following table provides a list of all 50 states with the link, allowing anyone to search their driving record:

Whether or not a warning goes on the record comes down to one thing: was it a verbal warning or a written warning? In most cases, officers will give out verbal warnings. In this case, there is no paper trail whatsoever of the potential traffic infraction. This means there will be a record of the infraction with the DMV or with the law enforcement agency that gave out the warning. In Vermont, the Motor Vehicles Department offers an easy and fast method for obtaining a copy of your driving record, with a list of costs for certified operating records and specific incident reports, simply fill out the record request form #VG-116.

Written warnings are a different story and are often used to identify frequent offenders of certain traffic infractions. In this case, there will be a record with the police department. So, if someone were to run a thorough background check on the individual, the written warning would likely be present on the background check.

However, it’s exceedingly rare that the DMV will have a record of a warning. In most cases, DMVs are only interested in traffic convictions as they will often involve adding points to an individual’s driving record based on the state.

In general, warnings are maintained for 60 days on police records, but this varies based on state laws.

Below is a link to the motor vehicle laws in each state, which will have more detailed information on what traffic violations are likely to result in a warning compared to those that will certainly result in a ticket.

For example, minor speeding infractions can sometimes land the individual with a warning. However, “reckless driving,” in many states refers to going a specific amount over the posted speed limit. Reckless driving infractions will almost never result in a warning, those will be cited as infractions, and depending on the severity can result in immediate arrest.

Will Warnings Show Up On a Background Check?

Getting approached by the police can be stressful, especially if a citation is at stake. If an individual is lucky enough to receive only a warning from the police and wonders, “do warnings go on your record,” it’s good to know that although they can show up, it is rare that there will be any long-term impact.

Do Warnings Go On Your Insurance?

No, verbal warnings will not go on your insurance as the DMV does not normally keep a record of warnings. If they did, it would have to be a written warning.

Do Warnings Go On Your Record In Texas?

Texas law requires all warnings to be written warnings. Therefore, warnings in Texas will show up on the police record, but not on the driving record.

Do Police Warnings Go On Your Record?

Yes, police warnings will go on a police record. However this is only the case with written warnings, verbal warnings will not go on your record.

How Long Does a Written Warning Stay On Your Record?

How long a written warning stays on your record varies by jurisdiction, however, most agencies only keep track of warnings for about 60 days.

Does a Warning Affect Car Insurance?

Most warnings will not show up on your driving record and thus should not affect your insurance.

How Do Car Insurance Companies Know about Warnings?

Most insurance companies will not be aware of warnings. The only way they would is if the DMV decided to add a warning to an individual’s driving record, which is extremely rare. But, if a state reports warnings, then it will show up.

Do Police Warnings go on Your Record?

Police warnings and warnings from any other law enforcement agency will only show up in police records if they filed a written warning. Even this will not affect the individual’s life in any way. The only exception is if a written warning is given and the individual commits another infraction, in this case, the officer will likely see that a warning was given recently, and will be less likely to give another warning.

How Can I Check My Driving Report?

How to check your driving record includes a simple request to the Department of Motor Vehicles (DMV) to request your official driving report which will show all infractions (including both moving violations and non-moving citations).