Does Getting Fired Go On Your Record? Only When Fired for This Cause 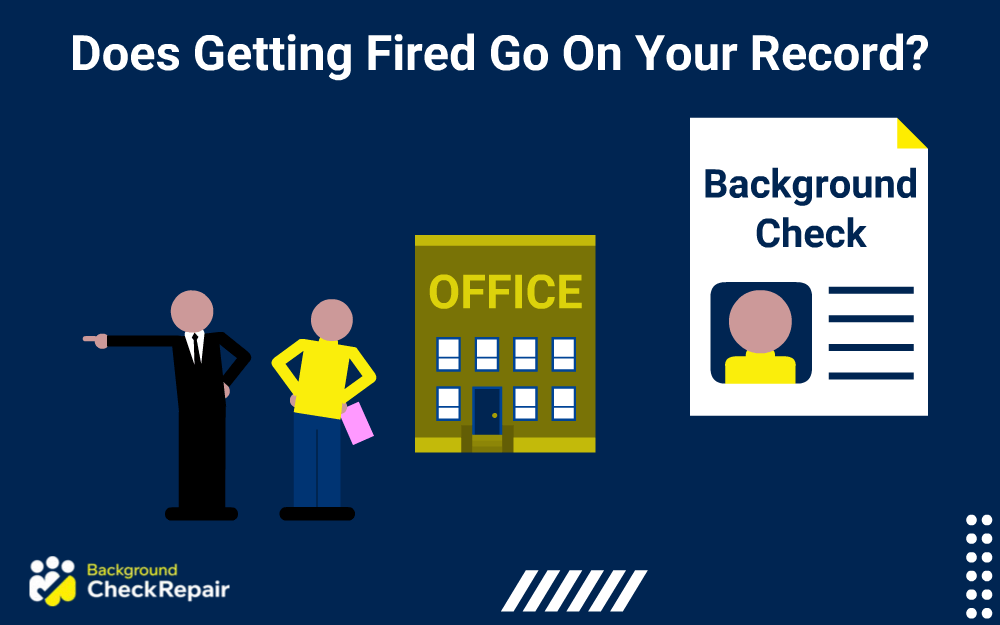 Does getting fired go on your record? Not necessarily.

Losing a job is never fun, but when someone is worried that a previous firing will go on their record, it can be even more stressful.

Fortunately, getting fired will only go on a person’s record (and subsequently will be part of what shows up on a background check) if the cause of the firing was related to criminal behavior.

In that case, someone who’s searching information for a background check may be able to put 2 and 2 together and figure out that the crime resulted in the loss of occupation, and may cause someone to fail the check. Can you still get a job if you fail a background check? Of course, but with a criminal record, it can be a little more difficult to obtain certain positions.

Note that even if the firing doesn’t go on your criminal record, it may show up on a pre employment background check for your next job that includes asking previous employers to verify your employment history along with an education verification check.

The ’cause’ that can make being fired show up on a person’s public record it what’s important. If the event was the result of any number of misdemeanors or felonies, the resulting criminal record will have them, including:

Although these are criminal records, a firing can also go on your record when employers do a search to find out where someone works and the previous employer makes them aware of the termination. Of course, being fired is something most people have experienced, so it’s not a big deal. However, understanding when being fired will appear on a record can help applicants know what to disclose before a background check shows it to a potential new employer.

Will A Background Check Show Getting Fired?

The short answer is probably not — it is unlikely for getting fired to appear on a person’s background check.1 The main instances in which getting fired will show on a person’s record is if the firing was related to a criminal offense (i.e., shoplifting, assault, etc.).

In most cases, getting fired does not have a direct impact on a person’s permanent record or future career opportunities. Although the disgruntled employer may not be the best reference to use for future job interviews, there is always a way to explain the situation to a potential new boss.

Various types of background checks can provide employers with a variety of information that can be useful to help make their decision, such as credit information, past employment history, education history, and other criminal activities, but will not display getting fired from a job.2

Does Being Fired Go On Your Record? (If I Get Fired, Does It Go On My Record)

The only time being fired will appear on a person’s permanent record is if the act that resulted in being let go was criminal in nature and resulted in a charge.

For example, if someone was fired for theft at their place of work (like being caught taking cash from the register), and criminal charges were filed and a conviction occurred, then that ‘firing’ will likely show up on a background check. But, it will ‘show up,’ in relation to the criminal theft conviction.

Does Involuntary Manslaughter Go On Your Record?

Involuntary manslaughter is an accidental action in which there is no premeditation to harm or kill the person involved.3 As a result, this charge has lighter sentencing than premeditated crimes. The punishment for this crime varies depending on state-wide and federal law but remains on a person’s record indefinitely. Therefore, it will be on a person’s criminal record.

Does Theft Go On Your Record?

Theft is taking personal property with the intent to remove the property from another person’s possession. If a person is found guilty of theft, it can result in fines, jail time, or probation.4 Theft will appear on a person’s permanent record and can significantly hamper their employment.

Does Misdemeanor Assault Go On Your Record?

Misdemeanor assault is one of the least serious assault crimes that does not involve serious injury but places someone in fear of harm or their own safety. Misdemeanor assault will appear on a person’s criminal record, which can drastically reduce the chances of them getting specific employment opportunities, houses, or bank loans.5 These charges will stay on a person’s permanent record indefinitely unless they go through diversion programs or other methods to wipe the charge from their record. 6

Does Gross Misconduct Go On Your Record?

Gross misconduct is a blanket term that covers a wide range of actions or behaviors that can result in someone being fired. Typically, gross misconduct refers to behaving in an unethical, immoral, or unprofessional manner that causes them to be fired from a specific business.7 Gross misconduct instances include bullying, theft, bribery, safety breaches, discrimination, harassment, violence, and other unethical manners.

Gross misconduct will only appear on a person’s record if the acts that caused the misconduct were criminal in nature.

Does Forgery Go On Your Record?

Forgery is making, using, changing, or possessing false writing with the intent to commit fraudulent activities. Also known as counterfeiting, this is a serious crime that is considered to be a felony according to the United States Federal Government.

If the forgery is considered a misdemeanor offense during certain exceptions, it may not appear on a person’s permanent record indefinitely. These misdemeanor exceptions have a prison time of one year in the United States and typically result in probation and community service.

However, when forgery is considered a felony, it will appear on a person’s record along with the firing from employment.8

How Long Does Employment Termination Stay On Your Record?

“Employee termination” refers to any instance in which the relationship between employee and employer no longer exists, such as resignation, layoff, position elimination, and retirement.

If there are charges against an individual in the workplace while they are an employee of a specific company, the employer should retain the personnel records relating to the charges under investigation. Although employers are required to keep records for a set amount of time, the act of employment termination will not appear on a person’s background check.10

Does Getting Terminated Show On Your Record: Does Getting Fired go on your Background Check All 50 States

Does getting fired ruin your career? Of course not.

Every state has specific laws about the sort of criminal information that can appear on a background check, either misdemeanors or felonies.

However, since these crimes (if they happen at work) will show up on a person’s record, they can be found by new potential employers.

One of the best ways to know whether the ‘firing’ will show up is to run a background check on yourself in your specific state. This is known as a level 1 background check.

Each state’s link is provided in the table below:

Although being let go or terminating employment will not appear on a background check, it can stay on a person’s permanent record if they committed a crime that caused the firing. When asking the question ‘does getting fired go on your record,’ the answer will always depend on the circumstances, but usually, no.

Does Getting Fired Ruin Your Career?

No, getting fired does not ruin a career. A person can still get a job in a variety of industries but should take into account why they were fired in the first place (ex: criminal conviction).

How Long Does A Termination Stay On Your Record?

Termination will not show on a background check unless the person has been convicted of a criminal charge.

Does Getting Fired Ruin Your Life And Affect Future Employment?

Getting fired can show untrustworthiness, unreliability, and unethical behavior. However, the sole act of having a criminal charge does not automatically disqualify a person from future employment.

Does Monster Keep Track Of Terminations?

Monster does not keep track of terminations.

Does Getting Fired From A Job Go On Your Record?

Getting fired from a job will go on a person’s permanent record if it was connected to a crime committed.

If You Get Fired, Does It Go On Your Record?

If a person gets fired, it can appear on their record if they committed a crime that caused them to be fired.

Does Getting Fired Stay On Your Record?

Getting fired will not stay on a criminal background check, but employers can keep employee records after a person has been fired.

Does Getting Terminated Go On Your Record?

Getting terminated from a job position can be on someone’s permanent record if they commit a crime.

If I Get Fired Does it go on my Record?

A firing will be on the employment records of the employer, but not on a background check public record unless the firing was the result of criminal behavior at work.

1Does getting fired go on your record? Movie Cultists. Retrieved from <https://moviecultists.com/does-getting-fired-go-on-your-record>

2LD Staff. Does Getting Fired Go on Your Record? Legal Definitions. Retrieved from <https://www.legaldefinitions.co/does-getting-fired-go-on-your-record/>

4The Consequences of a Theft Conviction on Your Criminal Record. Larry McDougal. Retrieved from <https://www.larrymcdougal.com/articles/the-consequences-of-a-theft-conviction-on-your-c/#:~:text=If%20you%20are%20found%20 guilty,the%20best%20of%20your%20life>

6How a Simple Assault Conviction Can Ruin Your Life. HG Org. Retrieved from <https://www.hg.org/legal-articles/how-a-simple-assault-conviction-can-ruin-your-life-42482>

10Quick Answer: How Long Does Termination Stay on Record? SeniorCare2Share. Retrieved from <https://www.seniorcare2share.com/how-long-does-termination-stay-on-record/>