Will Deferred Adjudication Show on a Background Check? 3 Big Exceptions

For those who’ve recently been charged with a crime, and are wondering what to plead, many people in similar situations also ask, “will deferred adjudication show on a background check?”

What shows up on a background check is an important question to answer because having a criminal record is a barrier to many types of employment, housing, volunteer opportunities, and even adoption. But is deferred adjudication the same thing as a confirmed criminal record? Not really.

Several states, such as Texas, offer a probationary period known as deferred adjudication, which could allow you to bypass a traditional criminal record. However, this special type of probation will normally show up on a criminal background check that examines arrests and charges that have been filed, allowing potential employers to see it…unless the following exceptions apply.

Keep in mind that even with the exceptions explained below, running a background check on yourself is the truly best way to know as it will eliminate all doubt and show exactly what is on the report.

Typically, deferred adjudication will not show up on a criminal background check as a “conviction,” but the probation itself will likely be included on a background check, depending on the type of check that is conducted and where it’s performed. 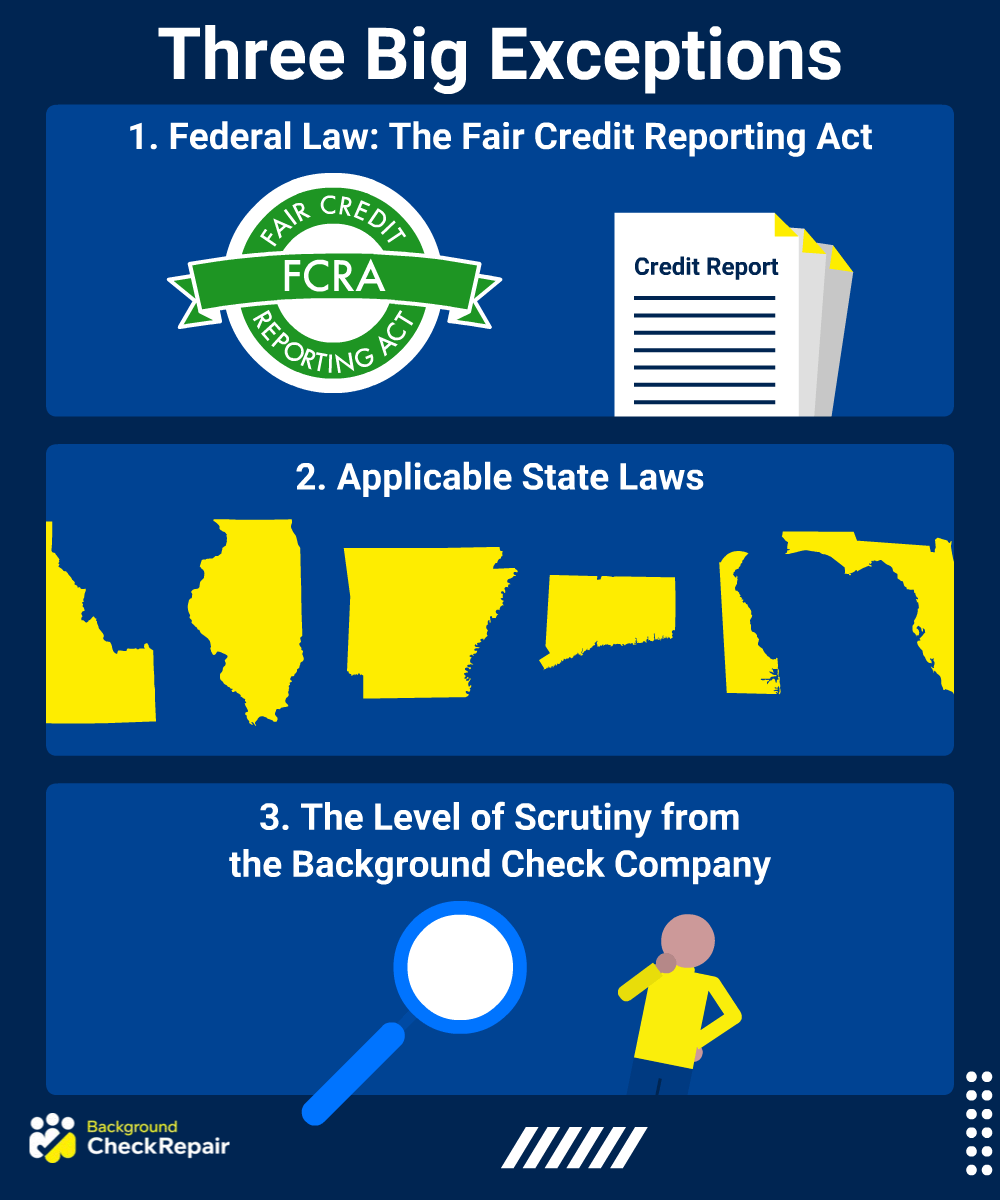 But, the following three exceptions can prevent the deferred action from showing up:

When employers run screenings on candidates, they may use official sources such as an FBI fingerprint background check, or other official background checks. However, many companies often use third party companies, which are regulated by both state and federal legislation.

The federal Fair Credit Reporting Act prevents screening companies from including records (that are not convictions) that are more than seven years old. However, if the person being screened is interviewing for a job earning more than $75 thousand annually, non-convictions may appear on a background check. This is because high-paying jobs typically require an escalated level of trust and responsibility, leading employers to look deeper into a job applicant’s background.1

So, whether a deferred adjudication shows up can depend on whether you are applying for a job which pays less than $75 thousand per year, or more.

Many states have legislation to limit and regulate what background check companies can reveal about individuals and job applicants, which is why many people wonder if they can pass a background check with a warrant. However, not all states or local jurisdictions have legislation to prevent non-convictions, like deferred adjudication, from showing up. Applicants should check their specific state’s laws to see if non-convictions are reported to potential employers.1

For the remaining states that do allow non-convictions to be reported, the Fair Credit Reporting Act limits what these states can reveal about individuals.3

3.   The Level of Scrutiny from the Background Check Company

To avoid disobeying state or local jurisdictions, many background check companies only report convictions on their screenings, rather than including non-convictions, pending charges, and dismissed cases. This allows these companies to have a standard across all states, regardless of individualized regulations. Making things more complicated, the results will also depend on whether a level 1 or level 2 background check were used.

However, not all screening companies adhere to this conviction-only policy. When getting a background check, applicants who are worried will deferred adjudication show on a background check should perform their own search to look for non-convictions.

The Fair Credit Reporting Act also protects an individual’s right to privacy, and anyone being checked for professional reasons cannot undergo a background check without permission.

Deferred adjudication only occurs when a defendant agrees to a special deal with the judge or prosecutor, and is largely conditional, based on the sort of debt the justice system decides the person should pay. If a defendant properly follows the terms of this special type of probation, their case will be dismissed. This option allows people who make a mistake, but who are otherwise productive members of society, to avoid jail time, which could cost them their livelihood or cause other long-term problems.

To fulfill their probation, a person may be required to attend counseling, complete community supervision service, attend workshops, and or meet with a supervisor. However, if they violate the terms of the agreement, the defendant will be found guilty without a trial since they have already filed their plea, and will receive a different subsequent sentencing.1

By admitting their guilt and performing the restitution outlined, people who have essentially made one mistake that didn’t cause harm to another individual, can move on without experiencing long-term repercussions.

Before moving on, it’s important to note that pending charges showing up on background checks follow different rules than deferred adjudication.

How Is Deferred (Pure) Diversion Different from Deferred Adjudication?

Offering a way for individuals to ‘divert’ jail time, that would unnecessarily harm the person and the community, is growing in popularity. While consequences for criminal behavior, such as driving while intoxicated (DWI or driving under the influence, DUI), must not be ignored, diverting the punishment for an otherwise upstanding member of society allows the person to pay their debt without ruining their lives.

When a prosecutor decides to divert a case, it can be done either before or after charges have been filed. The agreement generally involves treatment, community service, or other court ordered actions. If the latter is included, then the court does become involved in making sure the diversion penalty is carried out correctly.

If pure diversion is agreed upon after charges have been filed (and essentially the charges become dismissed), the court usually opts to seal the files. It will be up to state law whether or not the non-prosecuted charges and arrest record is included in the background check.

What Crimes Qualify for Deferred Judgments and Adjudication?

Particularly violent crimes and repeat offenders are usually not eligible for deferred adjudication, depending on the state. It is worthwhile to note that tax-related crimes may fall outside the scope of state laws since the IRS is a federal agency (do tax liens show up on background checks).

Before asking, will deferred adjudication show on a background check, it is important to know if this special type of probation is allowed in the state.

In each of these states, this special type of probation is offered on a case by case basis, since each case and defendant are different. All of the 20 states, minus the exception of Idaho, seal records once the probationary period of the adjudication is complete, which means that it will not show up on a background check after the conditions have been completed.4

However, at least 16 states, as well as the District of Columbia, only allow deferred adjudication for specialized situations. These states include:

While states like Florida and Louisiana offer the probationary period for other types of crimes, including felonies, these two states do not. In most cases, this group of 16 states offer deferred adjudication for very specific cases, such as first time drug offenders.4

Pennsylvania and Delaware only allow this probation for misdemeanors, not other crimes.

There are two US states which do not allow deferred adjudication at all: Kansas and Wyoming. Neither of these states offer any options for court-managed diversion, where a criminal offender can avoid a prison sentence.4

What Is Probation Before Judgment?

Some states offer a similar type of alternative sentencing, known as “probation before judgment,” also known as “PBJ.” In contrast to deferred adjudication, PBJ does not require defendants to plead guilty to the crime.

Instead of having a trial, the defendant is immediately given probation. Typically, probation before judgment is limited to first time offenders of crimes like drunk driving. Several states offer this unique probation, including Maryland and Delaware.

As long as the probation is properly completed, PBJ will be sealed from public records, and only visible to law enforcement (not shown on a background check).5

If deferred adjudication is an option in the state, it is recommended to hire legal counsel or consult an experienced law firm. An experienced criminal defense attorney can assist the process, helping individuals complete this special type of probation rather than a prison sentence.

Federal Law on Adjudication: Is It Possible to Seal Deferred Adjudication Records on Background Checks?

Sealing records means that certain information about personal criminal history is not available to the public. This prevents most employers, individuals, and companies from viewing any arrests, prosecutions, court documents, convictions, and other legal records that have been sealed. However, even if records are sealed, they are still visible to law enforcement, courts, and other official agencies.

Occasionally, certain employers or companies may be able to gain access to sealed records by requesting them from the court, if they are a “qualified agency.” For example, if a person is applying to a job at a specialized government agency or as a police officer, these agencies will likely be able to access the sealed records. Moreover, if the person is charged with an additional crime, sealed records will also likely be considered during sentencing.

For the vast majority of cases, sealed records (like sealing juvenile records) will not appear in a standard background check. In fact, in many states, such as New York, employers are not legally permitted to ask about sealed records.

Someone who has never been charged with a crime before, if the crime is non-violent and did not cause bodily harm, may qualify for deferred adjudication, which will allow them to avoid any jail or prison time. This special situation can actually be a benefit to the community by helping otherwise upstanding citizens pay their debt to society without jail time that can cost their livelihoods.

Before wondering, will deferred adjudication show on a background check, remember to check specific state laws to learn whether this type of guilty-plea probation will be part of the criminal record, and whether or not a criminal background check will include it.

6The Legal Aid Society. What You Need to Know After Your Convictions Have Been Sealed. Nd. 11 December 2021. Web. <https://legalaidnyc.org/get-help/wrongful-convictions-clemency-sealing/what-you-need-to-know-after-your-convictions-have-been-sealed/>