Can You Be Charged With Vandalism Without Proof? (Do This to Check) 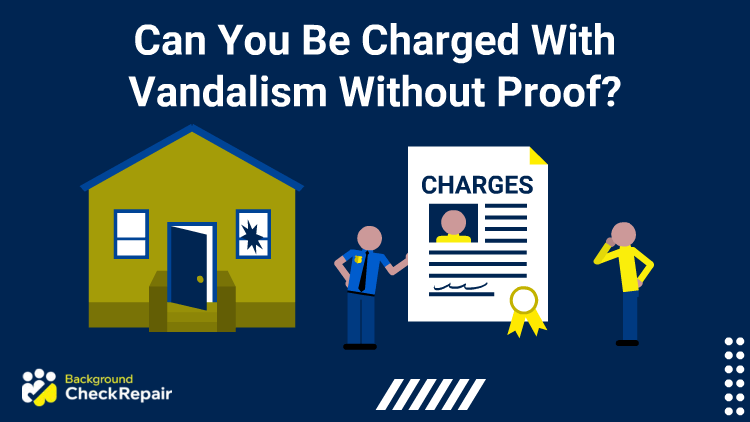 Can you be charged with vandalism without proof? In the days of electronic monitoring, this question might seem odd, but knowing whether or not someone has enough proof to charge you with vandalism can be tricky.

Individuals in this situation should perform a background check on themselves to check for charges against you online.

In most states there must be sufficient evidence that the person defaced the property, circumstantial evidence is rarely enough in these cases.

Moreover, there also must be proof that the individual intentionally and knowingly defaced the property, damaging property on accident is not a reason to be charged with vandalism. This is why knowing how to find out if criminal charges were filed for vandalism can help you defend against them.

So, if charges of vandalism show up on a background check, it generally means there was enough evidence to prove something.

Can you be charged with vandalism without proof? It is possible for charges to be pressed without proof, although it is highly unlikely.

If someone accuses someone of committing a crime that they reasonably could have done, such as someone in the immediate vicinity of the crime, this individual can be arrested for the crime. Knowing how to look up charges on someone can help. The legal description of probable cause is distinct, and applies in vandalism cases.

Since the individual was nearby where the crime was committed and perhaps other evidence points to this individual being a suspect, then a law enforcement officer can make an arrest due to probable cause.1 An example of this would be a law enforcement officer arresting someone with a can of spray paint that was the same color of paint that was used to vandalize city property nearby.2

However since this evidence is circumstantial, it is legal to carry a can of spray paint, then the officer is only able to arrest the individual due to probable cause. In order to charge the individual with a crime, it must be beyond a reasonable doubt that the individual committed the crime.3 Without an official charge against the individual, police will need to release them within 72 hours. The legal burden of proof is decided in court, but police need to have sufficient evidence to file charges.

This means that when it comes to the question of “Can you be charged with vandalism without proof?” The answer is no, however it is possible to be arrested for suspicion of vandalism with minimal evidence.

How To Prove Vandalism in Court

Proving vandalism in court is often difficult. However, if there is enough evidence to charge someone with vandalism or criminal mischief it is unlikely that the case will ever see a courtroom in the first place.

Generally speaking, overwhelming evidence that someone committed an act of vandalism is required to even charge the individual. In most cases this evidence will be a law enforcement officer witnessing the crime first-hand, or something like a security camera that shows the individual committing the crime. If this is the case, there is little reason for an attorney to recommend the individual plead not guilty and spend time and money going through court proceedings.

It will usually make far more sense for the individual to work out a plea deal with the prosecutor in return for a reduced sentence or something similar.

How To Prove Someone Vandalized Your Car

Proving someone vandalized your car is extremely difficult at best and in many cases is essentially impossible. Since vandalism crimes are fairly low on the priority list of law enforcement, it will often fall on the victim to prove that their car was vandalized and who did it. Even proving that someone intentionally vandalized your car is difficult as individuals could have run over something that gave them a flat tire, or rubbed against something that could leave a mark on their car. Beyond this, proving a specific individual did this is almost impossible without a confession or video evidence of the crime taking place.

As always, if the individual does have evidence that someone vandalized their car, they should file a police report and possibly contact an attorney in order to explore their options.

Someone Vandalized My Car: What Do I Do?

When someone vandalizes your car or any personal property. The first thing individuals should do is document the damage before filing a police report about the issue.

Although law enforcement is unlikely to thoroughly investigate something like vandalism, they may be able to connect it to similar crimes and investigate if there is a pattern of vandalism in the area.

What Happens When You File a Police Report for Vandalism?

Unfortunately, there is usually little that can be done from a law enforcement perspective when it comes to vandalism. Usually, a law enforcement officer will take down the basic facts, such as when the crime would have occurred, the kind of damage that was done, and other information of that nature. To file a police report, users need to visit the station or go online.

This is mainly done in case there is a pattern of vandalism, so it can be more thoroughly investigated. However, a single vandalism case is unlikely to warrant an investigation.

How To Prove Someone Keyed Your Car

Proving someone keyed your car is almost impossible without video evidence of the crime being committed. Many individuals wondering “Can you be charged with vandalism without proof?” may be doing so because they heavily suspect someone.

However, without video or photographic evidence, it will be extremely difficult to prove.

Can Vandalism Charges Be Dropped?

Any charges can be dropped at any time if there is sufficient reason for the charges to be dropped. This can be done if there is insufficient evidence, or if there was a procedural issue with the arrest or investigation, such as an illegal search.

How To Beat a Vandalism Charge

The best way to beat a vandalism charge is to contact an attorney as soon as the charges have been filed. An attorney will be able to examine all the available information and come up with the best possible plan to minimize the punishment if there is any at all.

As mentioned, prosecuting an individual for vandalism is extremely difficult without evidence. However, if there is evidence, such as photo or video evidence, a plea deal will likely be the best option available.

Punishment for Vandalism for a Minor (Can You Be Charged With Vandalism Without Proof?)

The punishment for vandalism will vary by state. However, when it comes to being charged with vandalism as a minor the sentencing is usually lower than it would be for an adult offender.

Use the table below to learn more about vandalism and criminal mischief charges in each state.

How To Press Charges for Vandalism

In order for an individual to press charges for vandalism, they will need to have sufficient evidence that the person they accused committed the crime, and did so intentionally.

With a crime like vandalism, this evidence will need to be fairly significant such as a video of the crime being committed.

What Happens When You File a Police Report on Someone?

In most cases, very little will happen when an individual files a police report on someone else. Generally, law enforcement will speak with the individual that wishes to file the report and take down their statements.

In most cases, after understanding and confirming as many of the facts of the case as possible, law enforcement will speak with the individual that the report was filed against. This is done to get both sides of the story and to confirm as much information as possible.

How To Press Charges on Someone for Theft

The decision to press charges for theft will generally fall to the prosecutor. The only thing that an individual can do is to provide law enforcement with a statement and as much evidence as possible. The more evidence there is the more likely that charges will be filed against the individual.

How Long Do You Have To File a Police Report for Property Damage?

Most minor crimes will have a statute of limitations of around 1 year. This means that the individual will have one year to file a police report about any property damage in order for the police to investigate and charge the individual with the crime.

Can Someone Press Charges for Someone Else?

In most situations pressing charges on someone else’s behalf is not possible. In most cases, only the prosecutor will have the power to press charges against someone.

In states that allow for individuals to press charges, only victims can press charges. However, victim is a loose term and someone that witnessed a crime can argue that they were a victim due to the traumatic experience of being a witness.

How To Get Charges Dropped Before Court Date

Can Charges Be Dropped After Arraignment?

Although most of the common reasons for a charge being dropped will be present early in the process, it is possible to get charges dropped before, during, or after the arraignment hearing.

How To Look Up Charges on Someone

The best way to learn how to look up charges on someone is to perform a background check on them. This can be done using the search at the top of this page to perform a free public records search using the individual’s basic information such as their name.

Getting charged with a crime you didn’t commit can be scary. Luckily, when it comes to, ‘can you be charged with vandalism without proof,’ the answer is usually no, so individuals wrongfully accused can rest easy.

Can I Learn How To Press Charges on Someone for Vandalism?

In most states only the prosecutor will be able to press vandalism charges. The only thing individuals can do is report the crime and provide enough evidence to law enforcement that they are able to file charges.

What Happens When Someone Files a Police Report Against You for Assault?

When someone’s reports an assault to a law enforcement, a law enforcement officer will likely take statements from both individuals on the incident. If there is sufficient evidence that points to an assault, the individual that commited the crime will be arrested and charged.

Can Charged Be Dropped After Indictment?

Charges can be dropped at any time during criminal proceedings if there is sufficient reason to warrant them being dropped.

Can I Learn How To Press Charges Against Someone?

Where Do I Learn How To Check for Charges Against Me?

Individuals can check for charges against them by performing a background check on themselves or by requesting records through the courthouse.

How To Find Out if There Are Pending Charges Against Me for Free?

Where Do I Learn How To Find Out if Criminal Charges Are Filed?

Individuals who have criminal charges filed against them will receive a notice of the charges by mail or in person. However, if they are still unsure, individuals can perform a background check on themselves.

What Happens When You File a Police Report for Theft?

When filing a police report for theft, law enforcement will take the individual’s statement on what was stolen and determine the relative value of what was taken. Usually an investigation will only take place if the value was significant and there is sufficient evidence.