Do Felonies Go Away After 7 Years? Only in These States (See List) 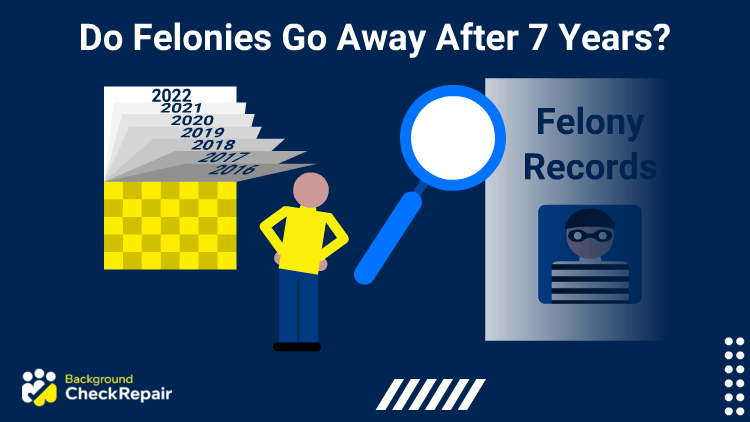 But, the answer is a little complicated because there are plenty of factors that dictate the length of time a felony can stay on the record.

In general, only certain states have passed laws that prevent background checks from showing felony records that are older than 7 years. However, that doesn’t mean that the felony can’t be accessed in these states.

Yet, even in these states there are exceptions to the rule, so knowing the exact details of your state is extremely important.

The main goal of the FCRA is to protect both businesses and their employees from unfair background check practices and other hiring practices that can become discriminatory. This mostly involves how credit reporting agencies share information as well as ensuring that individuals are giving written consent for background checks that involve an individual’s social security number or credit history information.

The FCRA is fairly limited in scope, leaving most of the major issues surrounding background check legality up to individual states and even cities and counties. When wondering do felonies go away after 7 years, the FCRA does not actually have any laws regarding how far back a background check can go.

This means that under federal law, a felony conviction from 30 years ago could hypothetically prevent someone from getting a job.

And…these records are always available to law enforcement personnel who are searching someone’s background in relation to criminal activity, so a felony technically never goes away.

In order to make it easier for individuals who have a criminal history to gain meaningful employment, many states have adopted laws to prevent someone’s criminal history from playing such a major role in their ability to find work. Although virtually every state has their own specific background check laws in addition to those outlined by the FCRA, only a handful of states have laws that prevent background checks from going back indefinitely. Once again, although these are considered 7-year-states, there are special conditions that when met, allow for companies to perform background checks that cover up to 10 years of a person’s criminal history. Usually these exceptions involve certain jobs like law enforcement, or for jobs that make above a certain annual salary.

Related Reading: How to find out if someone is a felon

Keep in mind that the records still exist in 7-year states; but they are essentially sealed from the public and can only be accessed by Justice Department and law enforcement officials.

Does a Felony Go Away After 7 Years in My State?

There are only a handful of true 7-year-states, but as far as the question of “Do felonies go away after 7 years?” living in a 7-year-state is not the only way to make a felony go away.

Most states have laws that allow for the expungement or sealing of certain records if specific conditions are met. Many of these conditions involve the nature of the crime, how much time has elapsed and other details. Use the list below to learn about the possibility of getting records expunged in your state.

Keep in mind that only in 7-year-states do felonies go away automatically, in all other states individuals generally have to go through a legal process to petition for a record to be sealed or expunged.

Related Reading: How long does a felony stay on your record?

It’s important to keep in mind that getting a felony record expunged or sealed is extremely difficult and in most cases, a felony will be on your record forever, unless the individual lives in a seven-year-state.

Do Felonies Go Away After 7 Years for Felony Classes?

Felony classes will vary by state, however most states have now adopted similar systems. In general, most states will use an alphabetical system, with Class A or its equivalent being the most serious felony, and E being the least serious.

Some states do not use a class felony system, instead each crime will have its own mandatory sentencing and punishments.

Although each state is slightly different, the table below can act as a general guide for what to expect from the different felony classes that are used in most states. Since each felony class distinction is up to the states, there is considerable overlap amongst crimes in various states. What might be considered a Class A in 1 state may be considered a Class B in another state, but could still carry the same punishment.

Will Felonies Ever Go Away? (How Long Do Felonies Last?)

Many individuals who are wondering: Do felonies go away after 7 years? are likely worried that a felony on their record may cause them problems for the rest of their life.

Related Reading: How long can a felony charge be pending?

This means that individuals with a felony on their record will likely have to deal with the repercussions of it forever. However, there are still steps that individuals can take to minimize the impact of a felony appearing on your record. The first is to seek expungement or the sealing of the record.

As mentioned, this is difficult and unlikely but is still a possibility worth exploring. Laws change constantly, especially for things like marijuana related convictions, which states such as Colorado1 are now making it possible to receive a full pardon for. When it comes to employment issues caused by having a felony record, there are a few simple steps that individuals can take to increase their chance of landing a job. The first is to run a background check on yourself. This will not only allow individuals to be aware of what exactly is going to show up as part of a standard pre-employment background check but also allows the individual to fix anything that is incorrect.

Knowing what is on your criminal record will also allow individuals to prepare for any questions hiring managers may have about their record and allow them to explain the circumstances and how they are working to move forward from a criminal past.

Another thing to keep in mind is that there are more companies than ever that are making a point to give individuals with criminal records job opportunities. Doing some basic research on companies like Home Depot or Walmart and understanding their policy when it comes to hiring individuals with a felony record will prevent individuals from wasting time applying to companies that have strict policies regarding criminal convictions.

Frequently Asked Questions About Do Felonies Go Away After 7 Years

How Long Will a Felony Be on a Background Check?

Will a Felony Disappear After Probation?

No felonies will not go away after probation. The same as a felony will remain on your record after serving a jail or prison sentence, felonies will remain after probation. The only way a felony will “disappear,” is if enough time has elapsed and the crime was committed in a 7-year-state or if the individual was able to get the record sealed or expunged.

How Do I Pass a Background Check With a Felony?

Passing a background check with a felony is possible but will depend on a few factors. The first being the company, different companies have different disqualifiers when it comes to background checks so it’s possible to be automatically disqualified based on the felony that was committed. The best thing is to research the company beforehand and prepare a response, even companies that hire felons will likely ask the applicant about it to see if they are working on bettering themselves.

There are new laws regarding the hiring of felons constantly, however most of these are at the state or local level, rather than federal. For example, amendments were recently made to New York City’s Fair Chance Act,2 which involves when employers are able to inquire about criminal history.

What Does an Expunged Felony Mean?

An expunged felony is a felony that has essentially been erased from an individual’s criminal record. The exact method will depend on the state but generally if a felony is expunged, it’s like the crime never happened from a legal perspective. This is different from a record being sealed, which means it still exists but can not be accessed by the public.

Does Your Criminal Record Clear After 7 Years?

Felonies generally don’t ever go away permanently. However, if misdemeanor or felony was committed while the individual was a minor, the criminal record is usually sealed when they turn 18. This means the record still exists but is no longer publicly accessible.

Does a Felony Go Away After 10 Years?

Felonies will only go away after 10 years in certain states. In these 7-year-states, all criminal records will be sealed after 10 years. However there are only a handful of states that have adopted these laws so in most states, felonies will still be present on an individual’s records beyond 10 years.

What Happens to a Felony After 7 Years?

In certain states, after seven years, a felony will not show up on a criminal background check. The record still exists, but it is not longer public information.

Do Felonies Go Away After 10 Years?

Felonies never “go away,” but they can be removed from the public record in certain states. Moreover, many felony charges and convictions can be expunged using the legal process established in the state where the crime was committed.

Will My Felony Show Up After 7 Years?

If you live in certain states, a felony will still show up after seven years on some background checks.