When Do Misdemeanors Go Away? Laws for All 50 States (Search) 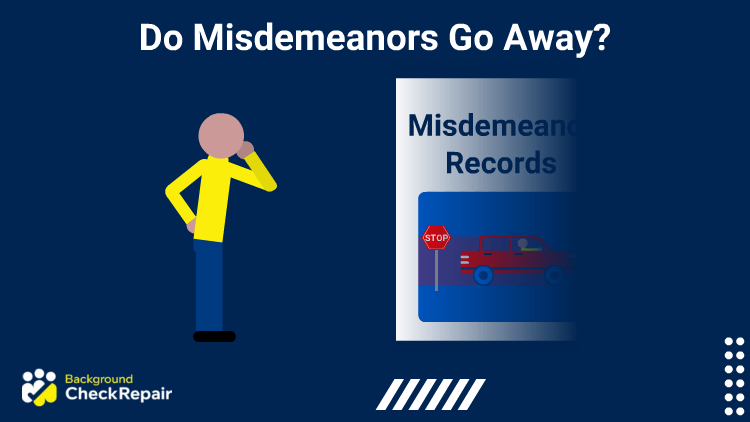 Do misdemeanors go away? And, if so, when are they gone from the record for good?

Unfortunately, the laws for all fifty states can vary, regarding misdemeanors on your criminal record.

To understand ‘when do misdemeanors go away’ in your specific state, there are two options.

Once that’s done, look up the state search information below to find out how long misdemeanors stay on your record, and how to fix your background check in the state where you live.

When Do Misdemeanors Go Away?

For the most part, misdemeanors do not go away automatically and if wondering how long does a misdemeanor stay on your record, the answer can vary. The only time that a misdemeanor would go away by itself is in a handful of states that automatically clear certain crimes committed by juveniles when the individual turns 18.

Besides this, the only way to make a misdemeanor go away is to file for an expungement or sealing of the record. Unfortunately, expungement is a difficult process and notoriously unreliable. However, more and more states are creating new laws to make it easier for low-level felonies to be expunged in order to help individuals gain new employment after serving jail time.

For certain states the question, “When do misdemeanors go away?” is much easier to answer. The only other way to get a misdemeanor to go away is to live in a state with the 7-year rule. The 7-year rule is a law that has been adopted by a handful of states that makes it illegal for employers to look at criminal history information that is older than 7 years. Even though the record still exists for legal reasons, it will no longer have any effect on employment as the charges and conviction information will be absent from a background check.

Do Misdemeanors Go Away When You Turn 18? Unfortunately, the idea that misdemeanors go away when an individual turns 18 is a common misconception. Certain states will automatically seal juvenile records but in most states, the individual must petition to have the records sealed when they turn 18.

Do Juvenile Records Get Sealed When You Turn 18?

It depends on the crime and the state but most states will make it possible for adults to have juvenile records expunged or sealed if certain conditions are met. Sealing juvenile records is also a common practice in some states.

Does Your Driving Record Get Cleared at 18?

Generally, an individual’s driving record will not clear when they turn 18. However, most driving records will clear eventually, often after 7 years.

Does Your Record Get Cleared at 21?

Records will not clear when an individual turns 21. If an individual has a juvenile criminal record, the petition to have these records sealed usually has a time frame involved so this process should be completed as soon as possible after the individual turns 18. By the time they are 21, it will likely be too late.

Do Class C Misdemeanors Go Away?

The exact laws and conditions that must be met in order to have a record sealed vary by state. However, in general, the less serious the crime the easier it is to get the record sealed or expunged.

Do Petty Misdemeanors Go Away?

When it comes to: When do misdemeanors go away? the kind of misdemeanor will also play a role.

However, most will require the individual to go through a petition process with a judge who will make the final decision.

Does a Misdemeanor Affect Employment?

Misdemeanors will likely have an effect on employment, although not always a major one. Very few companies will have policies that ban the hiring of individuals with misdemeanors on their records the way that many employers do with felonies.

However, most misdemeanors will be on a case-by-case basis so the specific crime and the individual’s attitude toward their criminal record will come into play.

The main difference between getting charged versus convicted of a misdemeanor is that a charge is simply a legal accusation, whereas a conviction is when a court determines the individual is guilty of what they are accused of. In some cases, an individual will be charged with a crime only to have those charges dropped. Keep in mind that even dropped charges can show up on a background check so individuals should be ready to answer questions about these charges. However, charges are far less serious than a conviction when it comes to a background check.

How Do I Know if I Have a Misdemeanor on My Record?

If asking, how do I know if I have a misdemeanor on my record, the easiest way to find out is to do a simple background check.

A name based check, or a free criminal background check can show any records. This can be done using an online background check service or by requesting criminal records from your local county court clerk.

Will I pass a background check with a misdemeanor? For some jobs, no, which is why expungement can be used to clear the record. Use the list below to learn more about expungement laws in your state.

Generally, expungement and the sealing of records with the state courts is the only way to make a misdemeanor disappear from an individual’s records.

Understanding state laws regarding criminal records can be a confusing endeavor. However, when it comes to misdemeanors, most states will have a clear path to expungement or the sealing of the records. So for many cases, the question of when do misdemeanors go away, will depend on the crime and the state.

Frequently Asked Questions About Do Misdemeanors Go Away

Will a Misdemeanor Affect Employment?

Misdemeanors will have some effect on employment. Although not usually an automatic disqualifier, most employers will ask questions about misdemeanors.

Do Misdemeanors Go Away After 7 Years?

Misdemeanors will only go away after 7 years in states with 7-year rules.

How Long Does a Misdemeanor Stay on Your Record?

In most states, a misdemeanor will stay on your record indefinitely unless sealed or expunged.

Does a Misdemeanor Show Up on a Background Check After 10 Years?

In most states, it is possible for a misdemeanor to show up after 10 years. However, most background checks will only go back 7 years.

Will a Misdemeanor Ruin My Life?

Misdemeanors will usually have a minimal effect on an individual’s day to day to life, however, it may be impossible to gain employment in certain industries based on the crime.

How Long Do Misdemeanors Stay on Your Record?

Misdemeanors will stay on your record forever in most states. However, expungement and sealing of the records is a possible way to get these crimes off of your record.