Does First Offender Show Up on Background Check? (Bad News) 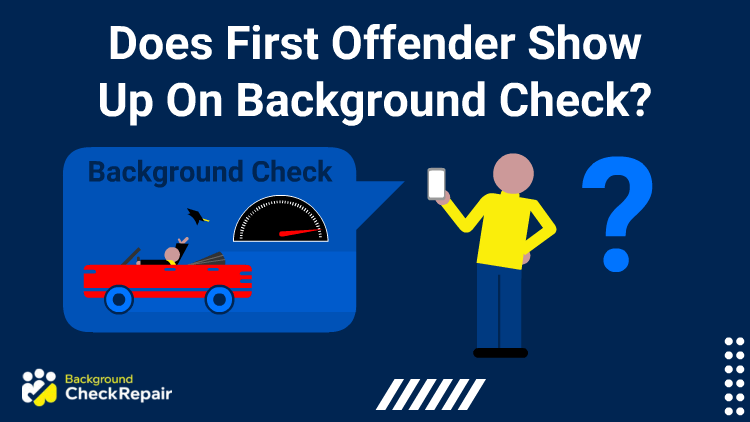 When someone has a run-in with law enforcement, it’s common to wonder, does first offender show up on background check, especially if the incident might impact a job or other opportunities.

Once you know whether the first offense will show up, then you can take steps to fix your background check before it stops you from getting hired, purchasing a firearm, or passing a rental background check.

In fact, individuals who are first time offenders will likely have more options when trying to expunge a criminal record because a number of states have passed laws simplifying the process.

There are almost always dozens of factors to consider when trying to figure out if something will show up on a background check. This can range anywhere from the type of check being performed, how long it has been since the crime was committed, the job duties, state laws, local laws, and more.

Rather than trying to navigate overlapping laws and unclear company policies, individuals who wonder, Does first offender show up on background check, should simply perform a background check on themselves.

By taking just a few minutes to perform a background check on yourself, all of the guesses of what will and won’t show up on a background check are removed, and individuals are able to see the exact same information that a potential employer is likely to see when performing a criminal history check.

Not only will it allow individuals to know what to expect in terms of questions that a hiring manager may have about their criminal history, but it is also the best way to fix any mistakes that may appear on the background check. Although rare, mistakes on background checks do happen, so knowing about them ahead of time will clear any potential issues that would come up as a result of incorrect information.

Related Reading: How to Do a Background Check on Yourself (Method for Each State)

Performing a background check, specifically, a criminal history check can be performed in a few different ways. In general, there are two main ways that give accurate information in a timely fashion with minimal effort.

The first and easiest is to go through a private background check service. Many of these companies operate completely online and there are tons of options to choose from. Despite the options, most of the companies will operate the same way: A name is entered in by the user and the background check service will run the name through dozens of different public databases.

These will include: Police databases, court records, sex offender registries, etc. All the information found in these databases that involve the individual’s name will appear on the background check which should be returned in a matter of minutes. Another option, and the more ‘official,’ method, is to access the information directly through the local courts. Local courts would be the criminal courts of anywhere the individual has lived in the last several years. All criminal history information is considered public information (with a few exceptions) so it is fairly easy to request information.

Simply access the website of the local courts and see if they have an online searchable database. If not, contact the county court clerk directly to find out the best way to make a records request. In most cases, the clerk will only need the name of the individual and a small search fee. Once again laws vary by state but many states will allow crimes to be expunged or sealed if certain criteria are met. Expunging a record means the record will essentially be destroyed and from a legal perspective, it will be like the crime never happened. This is the most thorough and preferred method, however, getting a record expunged is usually quite difficult and even impossible in certain cases.

Related Reading: Sealing Juvenile Records: What Happens When You Turn 18

Use the table below to learn about the expungement process for first time offenders in each state.

Although getting a record sealed or expunged is a great option for individuals who already have a crime on their record, avoiding a conviction altogether is an even better option. First time offender diversion programs offer exactly that, a chance to avoid a conviction by completing a specific program. First time offender programs are not always available and will depend largely on the state and the specific crime. For example, more serious crimes such as homicide are usually not eligible for first time offender diversion programs. First time offender felonies are usually still quite serious. In most states, the best that individuals can hope for as far as their background check is concerned is serving the sentence and seeing if expungement is possible.

This will depend largely on state laws regarding felony sentencing and first time offenders. It’s easy to know how long does a felony stay on your record, it’s forever unless you have it expunged.

Many individuals with the question of “does first offender show up on background check?” will be concerned about a misdemeanor conviction. Although under normal circumstances a misdemeanor will still be present on a background check, first time offenders usually have a few options available when it comes to committing a misdemeanor. More serious crimes will still warrant jail time and hopefully expungement, less serious crimes will often be eligible for programs like first time offender diversion programs.

What will happen as a result of a first time offender drug charges will vary widely based on the state. Although some states will see possession of class 1 drugs as a misdemeanor,1 in other states it may be a serious felony with significant jail time at a minimum. Compared to other serious crimes like violent crimes or drug distribution charges, there is normally a better possibility of expungement with drug possession charges.

Related Reading: Will I Pass A Background Check With A Misdemeanor?

First time felony waivers won’t help an individual’s background check too much but can often be a great legal option when available.

Most felonies will have specific minimum sentencing and punishments in each state, regardless of how many times the offense has been committed. However, some states offer first-time felony waivers to alleviate these punishments. If the individual lives in a state that offers first-time felony waivers and has never been convicted of a felony before, a felony waiver may be used which would allow the judge to give a sentence that is lower than what is normally required for that crime.

Does a Background Check Only Show Convictions? (If First Offense Was Removed) However, in most cases, a background check will show both convictions and changes. Even if an individual was charged with a crime but not convicted, a typical criminal history check will include records of charges being filed against the individual. This is not always a deal-breaker for most employers, having a prepared response when asked about the charges will greatly increase an individual’s chances of still passing the background check.

Does a Pardon Show Up on a Background Check?

A pardon will show up on a background check. Unlike sealed or expunged records, a pardon does not simply make a record disappear. A pardon basically means the crime still happened but has been forgiven.

Does Parole Show Up on a Background Check?

The vast majority of background checks will show that someone was on parole. These days, criminal history checks tend to show every part of a crime including arrest records, charges, conviction, sentencing, and parole information.

Does Jail Time Show Up on a Background Check?

The same as charges and arrest records are returned as part of a background check, sentencing information will also be present on most criminal history checks.

Getting charged with a crime for the first time can be a scary situation and one with long-term consequences. Luckily, most states have options available to minimize the long-term effects of a single crime. Knowing the options available for your state and being able to answer questions like: Does first offender show up on background check? Will go a long way in minimizing the impact of a criminal charge.

Do Pending Investigations Show Up on Background Checks?

What Happens to Your Criminal Record if You Complete the First Offenders Program?

After completing a first offender program, the charges for the crime that was committed will still be present. Without a conviction, many states will not allow employers to discriminate against an individual over charges that did not result in conviction.

Depending on the crime, many judges will be likely to go easy on first time offenders. Many first time offenders will have a chance to expunge their record after serving a sentence, or going through a first offender program to avoid conviction altogether.