How Long Does Reckless Driving Stay on Your Record? (The 7 Year Rule) 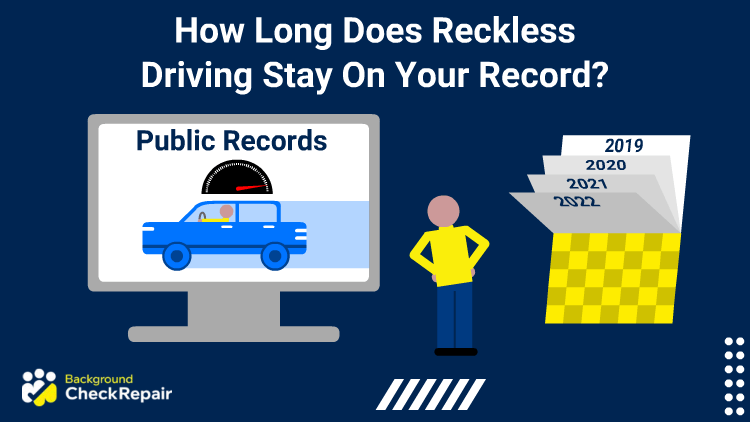 As with many questions which deal with criminal processes, the answer varies from state to state. However, there is a 7-year rule that you should know about.

Most background checks won’t search your driving record farther back than 7 years, it all depends on where the offense occurred.

Anyone can perform a name based check on themselves right now to see if the reckless driving charge will show up. But, that doesn’t mean that it will be erased forever, and some people will still be able to access it.

How Long Does Reckless Driving Stay on Your Record and How Does the 7-Year Rule Apply? The Bureau of Motor Vehicles in most states offer online access to your driving record at any time.

The Fair Credit Reporting Act limits the reporting of adverse information on background checks to a 7-year period.19 Although “adverse information” technically excludes criminal history, many states and many employers use the FCRA’s “7-Year Rule” as a guideline for reporting criminal records, as well. For individuals wondering “How long does a misdemeanor stay on your record?,” 7 years has become the benchmark for when misdemeanors are eligible for expungement.

Furthermore, in states where automatic expungement and sealing laws are taking effect, 7 years is the most common timeframe for misdemeanor expungement.

The driving record is separate from the criminal record and includes an individual’s complete driving history. Many states also use point systems to track traffic violations over time for punitive and remedial purposes. In most cases, points accrued from reckless driving will fall off of an individual’s record within 3 to 10 years, 5 years on average.

Though the offense may still be seen by individuals looking back further than that time frame, it is conventional for background check companies to investigate only the most recent 5 to 10 years.

What Is a Reckless Driving Charge?

It is important to understand what constitutes a reckless driving charge. Although there are slight variations to the wording of state laws, reckless driving is generally defined as a “willful disregard” of consequences and the safety of others while operating a vehicle.5 The key component in this definition is the term “willful” (some definitions use the terms “wanton” or “conscious”), which indicates that the offender was aware of the risks of their behavior and chose to carry on despite any potential consequences. Distracted driving laws have been increasing over the past decade, along with the penalties for endangering others.

Due to the deliberate nature of the offense, it is typically classified as a criminal misdemeanor (sometimes a felony in cases where the behavior resulted in injury to another). Some examples of reckless driving include:1,8

According to the National Highway Traffic Safety Administration, speeding alone was responsible for 11,258 deaths in the year 2020.20 This does not include the other behaviors recognized as reckless driving. Additionally, reckless driving charges are often accompanied by other criminal charges such as DUI or destruction of property.15 The difference between a traffic violation and a traffic crime is largely severity. For example, a speeding ticket may not reach reckless driving charges unless the person was exceeding certain speeds. Reckless operation of a vehicle, in nearly every state, means that the operator was a danger to the lives of others.

Reckless driving, on the other hand, is “willful and wanton” by definition, and thus carries greater consequences.3,14

How Long Does Careless Driving Stay on Your Record?

A lesser amount of points are assessed for careless driving than for reckless driving, and the driving record may be clear within 1 to 5 years.13

How Long Does Reckless Driving Stay on Your Record in Each State?

The following table looks at how long reckless driving stays on criminal and driving records in each state. Note that some states have automatic expungement laws which will remove the conviction from an individual’s criminal record after a specified period of time.

What Are the Penalties for Reckless Driving in Each State? Violating texting while driving laws is often a first degree misdemeanor in many states.

Aside from the fact that a reckless driving offense will crop up on an individual’s driving and criminal record, there are additional penalties which an offender is likely to face. For first-time reckless driving offenses, the penalties can include fines, jail time, community service, points against the driver’s license, and even license suspension or revocation in some states. Furthermore, there are the secondary effects of increased insurance premiums and impact on employment.1

Each state penalizes reckless driving differently. On the milder end of penalties are states such as Mississippi, where reckless driving is met with a $100 fine. In contrast, the state of Oregon may penalize an individual convicted of reckless driving with fines up to $6,250 and up to 1 year in jail.5

The table below outlines the penalties for standard, first-time reckless driving offenses in each state.

How Long Do Points Stay on Your License?

More than 80% of the states in the US currently employ a license point system. This system is used to track traffic violations by assigning points for each offense. Though each system is unique, most states only allow for a certain number of points within a 12-month period before the individual faces license suspension or license revocation.

In most states, reckless driving results in 6 to 8 points against a person’s license (see Table 2 above), but there are exceptions. In most cases, these points fall off after a period of 3 to 5 years, but there are some states with significantly longer periods and in some states points never go away at all.

Is There a Way To Learn, Find Driver License Number by SSN?

Many people have wondered “Is there a way to learn find driver license number by SSN?” While it is not advisable to attempt to find driver license number by SSN online due to the threat of identity theft, it is possible to use the SSN in person for this purpose.6 To do this, look up the DMV (see USA.Gov DMV Search tool) in the state where the license was issued, and contact them by phone to explain that the Driver’s License has been misplaced or stolen.21 The DMV will likely request that the individual visit in person with their social security card and other picture ID (such as a passport when available) in hand.

Is There a Background Check for Driver’s License Testing? Many insurance carriers will lower users rates after certain periods of time without convictions of reckless driving or other criminal infractions.

To answer the question “How long does reckless driving stay on your record for insurance?,” the average duration of the impact on insurance is 3 to 6 years.17 In some states, the offense remains on the driving record indefinitely, but most states employ a point system that allows violations to drop off over time. Reference the tables above for a breakdown by state.

Reckless driving is considered a serious driving offense and is classified as a misdemeanor in most states. However, penalties for this violation vary significantly across the states and can include fines, jail time, and even license suspension. The good news is that although reckless driving will remain on a person’s criminal record indefinitely in most states, it is unlikely to be reported beyond 7 years.

Anyone wondering “How long does reckless driving stay on your record?” can review the information and tables in this article for insight into the impact it has on criminal records and driving records.

4Daurio, A. (2022, August 25). How Long Does Reckless Driving Stay on Your Record in Ohio? GetJerry. Retrieved September 28, 2022, from <https://getjerry.com/questions/how-long-does-reckless-driving-stay-on-your-record-in-ohio>

13Sauline, A. J. (2017, April 03). What is the Difference Between Reckless Driving and Careless Driving? Albert Sauline, III Attorney at Law. Retrieved September 28, 2022, from <https://www.saulinelaw.com/criminal-defense-blog/2017/april/what-is-the-difference-between-reckless-driving-/>