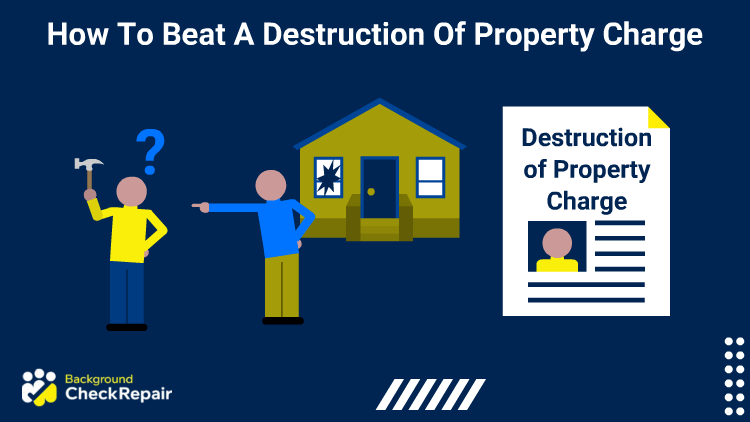 Many individuals may find themselves potentially facing charges for criminal mischief and will want to know how to beat a destruction of property charge and save their record.

The first thing to do is conduct a free one time background check on yourself. This will show whether or not the destruction of property shows up on your record.

If it does, this guide can help you reduce the impact a destruction of property charge will have on your record.

Beating a Destruction of Property Charge

Although any kind of criminal record is something all individuals should avoid, from an employment standpoint, having a destruction of property charge on your record is not the worst thing in the world. Still, avoiding the charge altogether is always going to be the best course of action.

Keep in mind that in many cases, avoiding charges entirely will be difficult and will rely on factors outside the control of the individual.

Many individuals may not be entirely sure if there even was a destruction of property charge filed against them. In this case, individuals should use the search bar at the top of this page to perform a background check on themselves. This will show the individual’s entire criminal history record in just a few minutes. 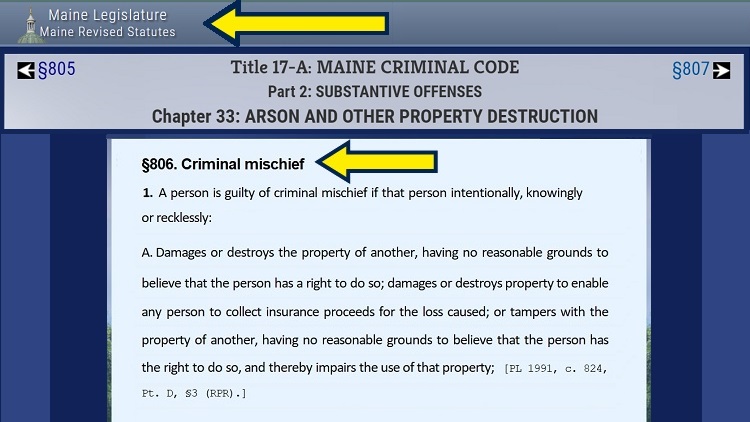 The criminal code in Maine outlines what defines criminal mischief, which is destruction of property conducted willfully.

As with any legal issue, individuals should consult with an attorney as soon as possible. This will not only give individuals a better idea of what options are available but the attorney may be able to ensure that charges are not brought in the first place, which would ensure the individual criminal record remains clean.

What Is Destruction of Property Charge?

In both cases, the severity of the charge will depend on the extent of the damage to the property. In most cases the damage caused will be given a dollar amount and the level of charge will be determined based on this number. In most states there is a $1,000 cutoff that is sometimes referred to as the $1,000 rule.

In these states if the total cost of the damage is valued at $1,000 or higher, then the charge will be raised to a felony. If the damage totals less than $1,000 the crime will usually be charged as a misdemeanor.

If Someone Damages Your Property, Is It Criminal Damage?

Many of the people ask questions like “if someone damages your property is it criminal damage?” Will likely have an incident in mind and will be wondering what their legal options are. 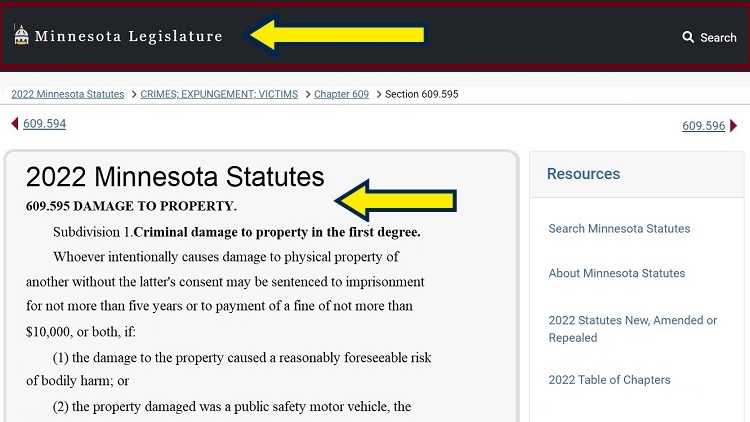 The Minnesota legislature defines damage to property penalties, which were recently updated.

Related Reading: How To Do a Background Check on Yourself

How To Prove Destruction of Property

This makes it unlikely that criminal charges will be filed unless there is concrete evidence such as photo, video or even eye-witness accounts in certain situations.

How To Press Charges for Vandalism

Individuals do not normally have the power to press charges, as this is the duty of the prosecutor. If an individual was a victim of vandalism, the best thing to do is to document as much information as possible and report the incident to the police. The more evidence that law enforcement is supplied with, the more likely it is that the prosecutor will file charges against the individual who committed the vandalism.

What Are the Charges for Vandalism for a Minor?

Vandalism is rarely considered a serious crime, especially for a minor. When it comes to what are the charges for vandalism for a minor? State law will determine the penalty, which is often lighter than it would be for an adult offender. In most cases, the individual will be put on probation.

Many of those asking how to beat a destruction of property charge will also be wondering, can vandalism charges be dropped or can charged be dropped after indictment? Criminal mischief in the second degree in New York occurs when the damage exceeds $1500.

Any and all criminal charges can be dropped at any point in the criminal proceedings. This can occur if there was a procedural issue with the case, if there is not enough evidence to convict the individual, or if new evidence exonerates the individual later on in the case.

The same is true for the question, can charges be dropped at an arraignment hearing.

The exact felony vandalism penalty will vary from state to state, however in most states a felony conviction for vandalism will have a maximum penalty of 1-2 years in prison and fines of around $100,000.

However, there are plenty of other factors that lead to the sentencing being worsened, especially if additional charges are added due to the circumstances of the crime.

Misdemeanor Vandalism (How To Beat a Destruction of Property Charge)

Misdemeanor vandalism is usually charged when an individual vandalizes someone’s property and the cost of the damage totals less than $1,000. The maximum penalty for this crime is usually 1.5 years in jail and fines around $5,000. However, this will depend heavily on state law and if the individual is a first time or repeat offender.

Use the table below to learn more about property damage penalties in each state.

Individuals facing a first-time offense criminal damage will have slightly more options than most individuals do. Generally, sentencing is significantly reduced for first time offenders of low-level crimes. In many states, charges may be dropped entirely for some form of community service, in order to keep the conviction off the individual’s criminal record.

Many individuals will want to know how to beat a destruction of property charge and how to get charged dropped before court date. Unfortunately, this is usually not a simple matter.

The best thing to do is to hire an attorney as soon as possible. At best an attorney will be able to get the charges dropped entirely. If not, an attorney will likely be necessary to work out a plea deal in exchange for a reduced sentence.

Use the table below to learn more about the legal proceedings in each state to better understand what options are available when facing a destruction of property charge.

What Happens When You File a Police Report for Vandalism?

How To Prove Vandalism in Court (Can You Be Charged With Vandalism Without Proof?)

Many people will be wondering how to prove vandalism in court, especially if they have a suspicion of who committed an act of vandalism against them. Unfortunately, proving vandalism is extremely difficult without concrete evidence such as photos or video of the incident taking place. Charges of vandalism usually require proof to proceed, and the burden of proof is on the state.

Facing criminal charges can be a stressful time, especially when individuals start to consider the long-term effects this will have on their background check. However, knowing how to beat a destruction of property charge is actually fairly simple and should help individuals better understand the legal process.

Can You Go to Jail for Damaging Rental Property?

Yes, individuals who intentionally damage another individual’s property can go to jail if they are convicted of destruction of property.

Someone Keyed My Car, Can I Press Charges for Vandalism of a Car?

Individuals do not normally have the power to press charges. However, individuals can present law enforcement with all the information they have. If the prosecutor thinks there is enough evidence to convict, they will likely press charges.

What Is the Punishment for Vandalism in School?

The Punishment for vandalism in school varies from state to state. Check with local law enforcement for specific times.

Do Pending Charges Show Up on a Background Check?

If charges are dismissed do you have a criminal record? It depends on the state where the charges were filed.

How Do I Know if I Have Been Charged With a Crime?

People asking, how do I know if I have been charged with a crime can run a criminal background check on themselves to see what crimes show up.

Can I Learn How To Look Up Charges on Someone?

What Happens When Someone Presses Charges Against You?

When wondering about what happens when someone presses charges against you, you can conduct a criminal history search on yourself.

How To Find Out if Criminal Charges Are Filed?

Can You Be Charged With a Crime Without Knowing?

Yes, you can be charged with a crime without knowing.

Can Charges Be Dropped at an Arraignment Hearing?

Yes, charges can be dropped at an arraignment hearing.

How Long Do the Police Have To Charge You With a Crime?

To know how long do the police have to charge you with a crime, you can search for statutes of limitations of your state and conduct a background check on yourself.