How Long Does an Arrest Stay on Your Record? (Easy Trick to Find Out) 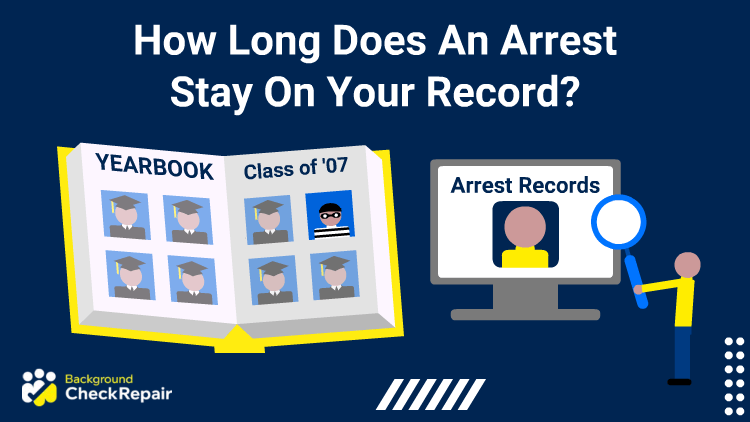 With more employers than ever conducting background checks on applicants, many people wonder how long does an arrest stay on your record?

Fortunately, there’s an easy way to find out right now. Simply do a background check on yourself to see what shows up.

Interestingly, since each state has its own requirements about whether a background check will show arrest records, there are quite a few different laws and other factors to consider.

Fortunately, it’s also easy to look up how long does an arrest stay on your record pretty quickly, using the free information below.

How Long Do Arrests Stay on Your Record?

Many individuals are understandably confused about what is on their criminal record and what information will show up on a background check and have an impact on employment opportunities. One of the reasons that this is so complicated is because not only do various employers perform background checks differently but there are also state laws to consider when trying to determine what kind of information the employer will have access to.

These companies will rely on public information such as court and law-enforcement records that are made available through the freedom of information act.1 The Freedom of Information Act outlines the differences between private and public records, and how privacy is ensured.

Since these are private companies and not government agencies, they will need to abide by both the background check laws outlined by the FCRA,2 as well as the state laws regarding criminal history information and other laws related to background checks.

Federal background checks, such as those performed by the FBI do not need to abide by state laws that would otherwise prevent certain information from appearing on the background check.

For example, certain state laws allow some criminal records to be automatically sealed from the public after a certain amount of time. This would make the record invisible to a private background check company, but an FBI Identity History Summary Check would be able to uncover this information.4

All of this must be considered when determining “how long does an arrest stay on your record?” For the most part, the answer will be forever, however many states will have laws that automatically seal these records or at least allow the individual to petition to seal arrest records after a certain amount of time has passed or other conditions are met.

With that being said, official background checks will almost always have access to an individual’s entire criminal history

As mentioned above, it is possible to get an arrest removed from your record, making it invisible to private background checks, which is what the vast majority of employers will use to screen employees. How this is done will depend heavily on the state, the crime that was committed, and whether the arrest ultimately resulted in a conviction.

Use the chart below to get an idea of when arrest records are eligible to be sealed in each state.

How To Find Out if Someone Was Arrested

How To Find Out Why Someone Was Arrested

If you have suspicions that someone may be convicted of crimes, learning how to find out why someone was arrested might be helpful. When viewing someone’s criminal record, the official reason for arrest should be included as part of the arrest record. This may not tell the entire story but between the arrest record and any conviction information, it should be fairly simple to deduce the specific reason for the arrest.

How To Find Recent Arrests

Knowing about what’s in your record is really important and one question you should ask yourself is how to find recent arrests. Although arrest records are public information, law enforcement agencies don’t normally publish arrests as they occur in a specific place. Individuals wanting to obtain recent arrest records will need to request them from law enforcement or the courts.

How To Find Old Arrest Records

State laws that seal arrest records will be the biggest obstacle in obtaining old arrest records. There will be no way around sealed records unless the individual the records belong to is the requester. Otherwise court and law enforcement records normally go back several decades at the very least.

Use the list below to learn how to find old arrest records in all 50 states.

Some individuals may suspect that someone they know has a warrant for their arrest and will want to check any active arrest warrants at the federal level. Federal arrest warrant searches are performed through the U.S. Marshals service, which allows access to permitted users only.

The easiest way to do this is to look at the FBI’s fugitive list or contact the U.S. Marshal warrant information system.5,6

How Long Does an Arrest Stay on Record? (Do Arrests Show Up on Background Checks?)

Do Arrests With Conviction Show Up on Background Check?

If Charges Are Dismissed Do You Have a Criminal Record?

A common question that people ask themselves when they wonder what appears on their record is if charges are dismissed do you have a criminal record?

If an individual is arrested, even if the charges are later dismissed, they will have this information on their criminal record. However, the effects of an arrest without a conviction will have a minimal effect on future background checks. It is also possible to get non-conviction arrest records sealed in most states.

If You Are Charged But Not Convicted Does It Go on Your Record?

Charges as well as convictions will appear on criminal records. In general, it is relatively easy to get dropped charges sealed and thus make them invisible during background checks.

Do Arrest Records Ever Go Away?

Does Your Criminal Record Clear After 7 Years? (How Long Does an Arrest Stay on Your Record?)

The idea that your criminal record is cleared after 7 years is a common misconception. Some states have laws known as the 7-year-rule which seal records after 7-10 years. However, only a handful of states have adopted these laws and most states do not ever clear criminal records.

Can an Arrest Record Be Expunged?

Getting arrest records expunged will depend on state laws. The laws vary widely and while some states make the process fairly simple, many states offer very few paths to getting records sealed or expunged.

How To Expunge an Arrest Record

For the most part, the process of getting a record expunged will involve a petition to have the record sealed with the courts. Most states make learning how to expunge an arrest without conviction easy on their Justice Department websites, which makes it easier for removing arrest records from your background check.

The steps vary from state to state but for the most part, special conditions must be met such as how much time has passed since the arrest.

Do Misdemeanors Go on Your Record?

Misdemeanors and above will always appear on a criminal record. Many individuals with questions like how long does an arrest stay on your record will also be wondering about misdemeanors effects on their record.

Misdemeanors are slightly harder to get removed from a record compared to arrests. However, it is possible in many states to get a misdemeanor record sealed.

Will a Felony Show Up on a Background Check After 10 Years?

Felonies will usually be on a background check forever. Notable exceptions are felonies that were overturned and then sealed, or felonies committed more than 10 years ago in 7-year states. However, they will still show up on a federal background check if this is the case.

Not knowing what will show up on a background check can be scary, especially for individuals who have been arrested and have questions like “how long does an arrest stay on your record,” as always the best thing to do in this scenario is to run a background check on yourself.

How Long Does Arrest Stay on Record?

Arrests will stay on your record forever in most cases, unless the record was sealed in which case it will only be accessible by government agencies.

How To Find Someone Who Was Arrested?

People may want to know about a specific individual. Knowing how to find someone who was arrested is one way to learn more about them. Individuals searching for arrest records can use the public records search at the top of this page or contact local law enforcement.

How To Find Out What Someone Was Arrested For?

How Long Does an Arrest Stay on Your Background Check?

Arrests will stay on background checks forever in most cases. Arrests that did not result in convictions are often eligible for sealing.

Do Misdemeanors Go Away After 7 Years?

Misdemeanors will only go away after 7 years in seven year states. Otherwise the record will be available forever.

How Long Does a Misdemeanor Stay on Your Record?

Once it has passed the retention time established for each state, one could wonder, how long does a misdemeanor stay on your record? Misdemeanors will usually stay on your record forever unless a state law allows the record to be sealed or expunged.